Keys to the Game Vs. Rangers

The Bruins are coming off of a win over the Buffalo Sabres. Goliath beat David the second time. Now the Bruins have to go up against the rangers for the third time already this season. The Rangers are also coming off of a win against a mediocre team; the Tampa Bay Lightning. The Rangers so far this season are a mediocre 6-5 and are 8th in the Eastern Conference. The Bruins are second only behind the New Jersey Devils. The first game the two teams played went to the Bruins in a 3-1 victory while the second the Rangers won in over time when Marion Gaborik showed us how he got those 41 goals last year. Now the Bruins have to go up against the boys in blue for the third time and look to get points for the third time.

1) Bunker Down. The Rangers scare me most out of any team in the NHL let alone the Eastern Conference. The team has heavy fire power offensively, a great coach, and still has a grinder/defensive mentality. They constantly lead the league in blocked shots and then if you do slip one buy you have to hope Lundqvist is having an off day which is extremely rare. The Bruins will have to play tough and solid defense. The Bruins can't afford any lapses in defense and no mistakes by the most important man on the team Zdeno Chara.

2) Go Glove. Henrik Lundqvist is one of the best goalies in the NHL but he has his week area. With some goalies its that dirty dirty 5-hole (cough Bryzgalov cough) and with others its top shelf stick side. But with Lundqvist its his high glove side. Most goals that make it past him go glove high. The Bruins though don't have many players that can snipe precisely. Rich Peverley loves to hit the plexy glass and Seguin has been off his game. The only remaining players that could hit the area consistently are Horton and Marchand. The Bruins should make it a focus area in their offensive game. 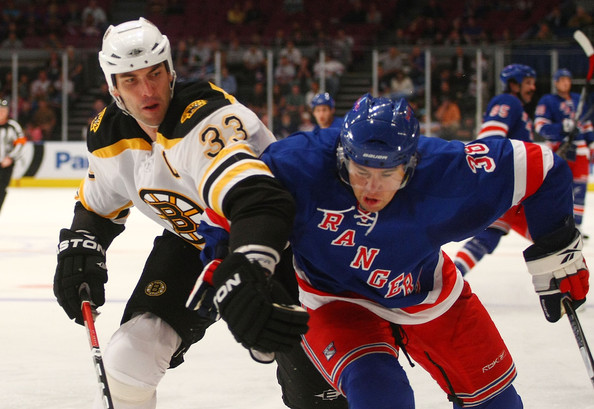