Keys to The Game Vs. Tampa

Sure teams have come close. Just look at Tampa Bay two years ago in the Eastern Conference. They have even won a cup. But hockey teams in Florida can't keep winning and that's the problem. Hockey in Florida also has a struggling fan base. Not just for hockey but for all sports. So far this year the Lightning are 8-6-1 and are second in the South East behind Carolina.

The Bruins, who actually have a large die hard fan base, are coming off of a tough 3-2 win in Winnipeg. Seguin got a goal and Bruins D-men chipped into the offense with two re-directed slap shots.

1) Stopping Stamkos. The best scorer on the Lightning, and perhaps in the NHL, is Steven Stamkos. So far this season Stamkos already has 10 goals and 12 assists in only 15 games played. Stamkos is the scariest guy on Tampa and the Bruins can't give up easy shots to him.

2) Horton. Tyler Seguin got a goal last game which hopefully means he is going to start to turn it on. Nathan Horton on the other hand is still trying to find his stride. Horton was the one who scored the game winning goal in overtime in game 7 against the Lightning in the Eastern Conference Finals. That's why it would be nice if Horton got a goal against the Lightning.

3) Weak goalies. The Lightning have first time starter Anders Lindback and backup goalie Mathieu Garon. Lindback has a very mediocre 3.00 goals against average but does have a 7-3 record because of the Lightning's tremendous offensive force. The Bruins won't have to worry about doing anything too fancy on offense to get the puck in the net. 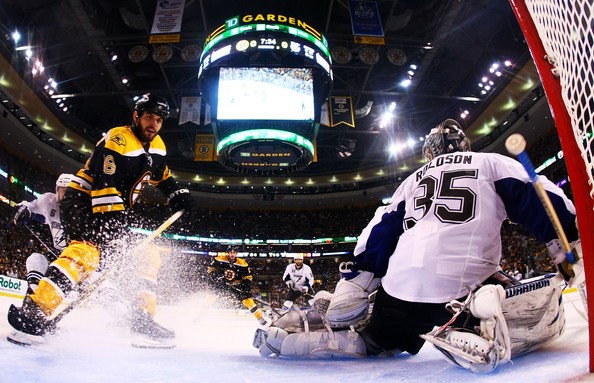