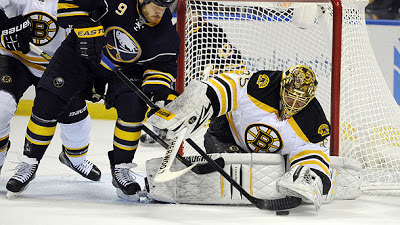 I didn't get to watch last night's game because of work, but my friend was keeping me updated with text messages throughout. After learning that Dougie Hamilton was having an excellent game, and that the Bruins were up 2-1 going into the third, I seriously thought Bruins had it in the bag. 30 minutes later I get a text: "Jesus that sucked." I looked up the score on my phone to see the Bruins blew a 2-1 lead surrendering 3 goals in the third period...sounds a whole lot like the January 31st game vs Buffalo where the Bruins had a 4-3 lead early in the 3rd to surrender 3 third period goals on the way to a 7-4 loss.

It was then that I realized that the only two regulation losses this year have been vs Buffalo, and each loss happened due to three unanswered goals in the third period. I also realized that the Bruins have also lost two Overtime games to another New York team, the Rangers.

I expect the Rangers to be give the Bruins trouble based on their studs of Gaborik, Richards, Nash and Lundqvist, but Buffalo? Buffalo is a solid team, that has been playing very inconsistent this year. They are in the bottom of the standings, yet due to the Bruins mistakes in two games, they have beat us.

Luckily for the Bruins they don't face Buffalo for about a month and won't see the Rangers except maybe in a playoff series. The Bruins have a favorable part of the schedule against some of the weaker teams. The Bruins shouldn't expect to just go out there and win. As we learned last night, one mistake can lead to a loss, and the Bruins will need to shake off this loss.

They next play tomorrow night in Winnipeg, a team that in the early season brought Boston to a shootout. They then get a few days off and face a scary offensive team in the Tampa Bay Lightning. Tampa has three great scorers, St. Louis, Lecavalier, and Stamkos, and if the Bruins don't contain them, that game could turn into a mess.

The Bruins will need to forget about the loss and go back to their bread and butter. If they continue the sloppy play we may be panicking.