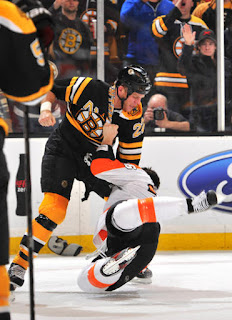 2 minutes 18 seconds. That was all the Bruins needed as they scored 3 goals in that amount of time after a stagnant 1st 10 minutes of play.

The Bruins started the scoring on a Tyler Seguin powerplay goal assisted by Milan Lucic, followed by a Chris Kelly goal from promoted Jordan Caron, and wrapping it all up was Daniel Paille on a pass from Gregory Campbell.

The Flyers would barely apply pressure on the Bruins, as Tuukka Rask would finish the game with his second shut out of the season on 23 saves.

Shawn Thornton would also add on the punishment as he man handled Zac Rinaldo half way through the second stanza.

The man up went 1 for 2, with the second powerplay coming with 3 minutes to go in the game. 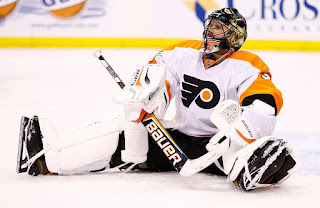 All in all a great game for the B's. They got an early lead and did what they had to do to secure the victory. They get a much rewarded day off tomorrow before they head up to Ottawa on Monday night and then to Pittsburgh on Tuesday.

Ottawa has slipped as of late, falling down the standings. On the other hand, Pittsburgh is one of the better teams in the East, and should give the Bruins a challenge.