Keys To The Game Vs Toronto

Complacency set in over the Bruins at perhaps the worst time in the season. The Bruins started the season winning but now they have to fight for games as the scheduele has began to reflect a lockout induced scheduele.

In the month of March the Bruins are 7-4-1. The Bruins are coming off of a 2-1 win over Ottawa after losing two games in a row to Pittsburgh and Winnipeg. Now the Bruins are about to play their final road game in the four game road stint. Monday the Bruins will be home again to face Toronto. Again. The Last time the two teams face it was a blood bath. We could see that again tonight. 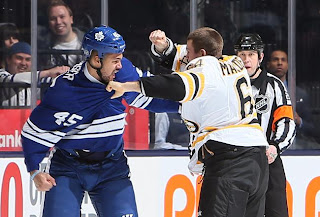 In the month of March the Leafs are 3-3-1. The Leafs are coming off of a 5-4 shootout loss to the Buffalo Sabres. The Leafs losses come mainly from poor defense from both forwards and defense men. The Leafs best defense man and one of the top D-men in the league is Dion Phaneuf. So far this season Phaneuf has 5 goals and 17 assists. Which is great for a defensive defense man. But Phaneuf also has a plus/minus of -9 which is not what you want from your top defense man. For comparison Zdeno Chara has a +/- of +14, Shea Weber at +5, and Marc Staal at +4. 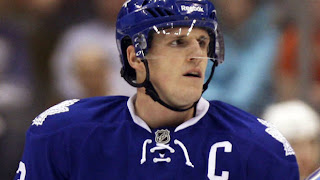 1) Lineup Mayhem. Cluade Julien isn't all business as Marc Bertrand and Adam Kaufman implied this morning on the Sports Hub. Claude has been known to have attachments to players and especially the older ones. It's nice to see in sports becuase usually as athletes get older some teams get rid of them like they never did anything useful for them.

But sometimes it can be frustrating. Such as Bourque getting as much power play ice time as Seguin in the beginning of the season. And the fribble line getting powerplay time every game. With that said Pandolfo is a very good player, so is Caron, but Spooner has shown more energy and talent. Pialle has shown more goal scoring ability. As of now it may be best if Spoons centers a third line of Pialle and Peverly. Let Caron go to the fourth line. A place Brad Marchand earned his stripes and the fourth line is a line that can still score. 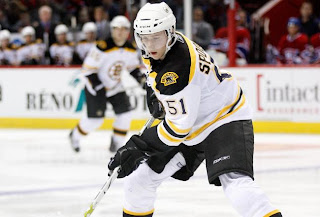 2) McQuaid. Adam McQuaid is out and Toronto does have a scary offense with a lot of fire power. Kessel, Kulemin, Kadri, Van Riemsdyk, and MacArthur can all be dangerous scoring threats. The Bruins can't afford to have any lapses on defense. It is unkown whither Matt Bartkowski will be in the lineup or Aaron Johnson, who has played well, will continue to play. Johnny Boychuck might sit out the game due to an injury in practice which means both Bartkowski and Johnson will be in. If that is the case then Andrew Ference and Dennis Siedenberg will have to step their game up. It's almost playoff time anyway.