On The Block: Brenden Morrow

The 34 year old winger, Brenden Morrow, is rumored to be on the Dallas Stars trade block. Morrow has spent his whole NHL career in Dallas starting out in the 1999-2000 season. 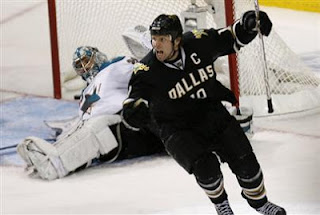 Morrow has 5 goals and 5 assists in 22 games played. Morrow can be described as a power forward and also someone who can score amazing goals. Morrow is a usual 20 goal scorer and 100 penalty minutes a season player.

Morrow would be a great fit for the Bruins third line. It would mean Peter Chiarelli would'nt have to give up much to aquire the savvy veteran. It also means Claude Julien won't have to edit the top two lines. Morrow could be a fan favorite and a great team player. With Ryder traded and Alfreddson a unlikely possibility; Morrow and Iginla are the most viable trade possibilities.