Should the Bruins Claim Jussi Jokinen

I don't know how legit Hockey Insider is, but there has been a lot of controversy over Carolina forward Jussi Jokinen. Jokinen, 29 years old is off to his worst start of his career. (5goals 5 assists) and a minus 7. 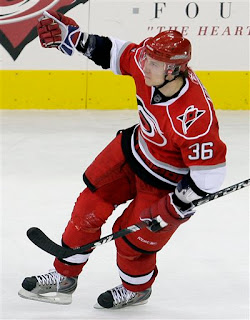 I say if Jokinen is available the Bruins should try him out. It sucks that the season is almost over, but it would be a better option to obtain someone without giving anyone up, instead of sending a number of prospects for an aging veteran at the end of his career (Jagr/ Iginla) who might not exactly have enough in the tank to help the B's. Jokinen is 29 years old, so he has a lot of hockey to be played. Maybe a shakeup of scenery with a team that is committed to winning could spark him. Heck, he's better than Pandolfo and Bourque.

As the trade deadline ascends on us, a lot of rumors will be flung around. The Bruins surely need an offensive improvement and although Jokinen is playing terrible this season, he is capable of putting points on the board and maybe playing with a better team will help.

Here's an article I found from earlier this month, it breaks down Jokinen's stats perfectly, maybe he can be that winger the Bruins need.