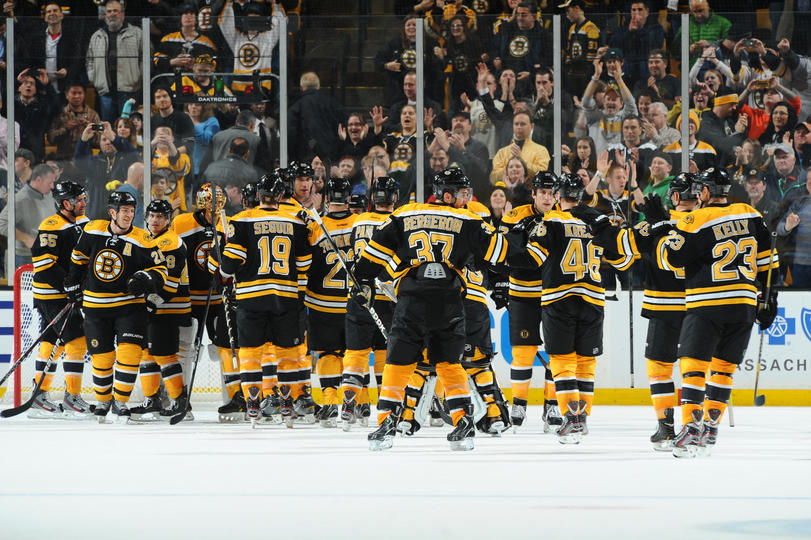 The 2013 NHL trade deadline has passed, and up to about 2:00 pm EST, not much had gone down in terms of major deals. A majority of the deals made were on the opposite side of 'blockbuster,' but here are the 3 most significant moves, along with a recap of what the Bruins and Peter Chiarelli decided to do as the clock ticked towards 3:00 pm

1. Marion Gaborik to the Rangers

The biggest, and most shocking trade, had to be the trade of Gaborik to the Bluejackets for Derek Dorsett, John Moore, and Derick Brassard. It seems kinda ridiculous that the Rangers would trade a 35+ goals per year player, but with Rick Nash in the fold, Gaborik was sacrificed for 3 solid players that fit the Rangers mold. As for the Bluejackets, the addition of Gaborik gives them a significant upgrade to their club, as they continue their rather improbable run towards the playoffs. (And as I'm writing this, the Rangers are up 5-1 on Pittsburgh, with 2 goals from Ryan Clowe and Derick Brassard. Go figure)

2. Jason Pominville to the Wild

The Sabres continued their in-season fire-sale and traded their captain Pominville and a 4th rounder to Minnesota for 2 highly touted prospects, including goalie Matt Hackett, a 1st round pick in '13 and a 2nd rounder in '14, which is quite a significant haul for the Sabres. By grabbing Hackett, the writing might be on the wall for Ryan Miller, as you can expect the chatter of him being dealt in the off-season to ratchet up as Buffalo is 1 step away from total re-build mode. The Wild gave up a ton to get Pominville for the stretch run, yet they are almost a lock at this point to make the playoffs. As is the theme with many teams this year, the goal from the deadline was to stock up on players and gun for a deep run come the end of April.

3. Ben Bishop to the Lightning

The last of the major moves made on Wednesday was quite a surprise, as the Ottawa Senators shipped out goalie Ben Bishop to Tampa Bay for rookie forward Cory Conacher. Conacher gives the Senators a quick and flashy scoring option that can fill the void left from the rash of injuries that have decimated the team. Conacher's production has tailed off a bit, as the league has caught up to his style of play. Regardless, teams in the Eastern Conference will have to pay attention to him come the playoffs. By acquiring Bishop, the Lighting and GM Steve Yzerman may have finally found their long-term solution in net. The team sits 3rd in the NHL with 111 total goals, yet 21st in goals allowed. Its a move that has its eyes set on next year, with some stability in net, the Lightning can begin to re-tool for the '13-'14 season.

The Bruins' moves at the '13 deadline are quite noteworthy, with the obvious excitement coming from the Jagr trade. Jagr provides a good amount of versatility to the team, as Jagr can be slotted on either of the top 3 lines. It's well-known how David Krejci feels about his fellow Czechoslovakian, and its almost a certainty that the two of them will be on the ice at the same time. At least that's the hope. You never know with Claude. The other trade brought in Wade Redden, a solid stay-at-home defenceman that will slot into either the 2nd or 3rd defense pairing. With the Bruins dealing with a few injuries on the blue-line, Redden will fill a needed spot. Going even further, Dougie Hamilton is a rookie. And nobody needs to be reminded how Claude treats rookies when the games get tighter.

With the news that Patrice Bergeron received yet another concussion, it can be assumed that he will miss a few weeks at least. Its an awful bit of news, as Bergeron is arguably the last player the team can afford to loose. However, looking down the road, the Bruins look to be in good shape. Hear me out: Chris Kelly and Adam McQuaid have resumed skating this week, so they look to be on the way back. Johnny Boychuck is not at 100%, so give him a few more weeks and he can be back to full health. If Bergeron can escape any major issues from this latest incident, the time off can be may be a good thing for Patrice. The most important factor the Bruins as they play the last 13 games is to stay healthy. With those 4 players coming back from injuries over the next few weeks, along with the additions of Jagr and Redden, the Bruins will be ready to go for Round 1 of the playoffs.