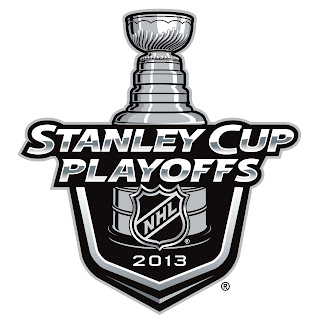 It's that time of year when the regular season concludes and the post season begins. I thought I would give my predictions for the 2013 Stanley Cup Finals.

Agree with me disagree with me, call me an idiot, share your thoughts on my predictions in the comment section.

I'm going to start with the West first, with the #1 vs #8, Chicago Blackhawks vs the Minnesota Wild.
The Blackhawks have been playing outstanding this year, while Minnesota barely snuck into the playoffs over Columbus. My prediction is that Chicago dominates this series in 4 or 5 games.

Moving onto the #2 and #7 matchup, the Anaheim Ducks vs The Detroit Red Wings. Now Anaheim also played great this season, but Detroit always seems to make a run during the playoffs. I wouldn't be surprised if Detroit comes through with the upset, but my gut is telling me pick Anaheim and I say this series goes 6 or 7 before Anaheim moves on.

The #3 vs #6 matchup is also an interesting one featuring the Vancouver Canucks and the San Jose Sharks. The Canucks haven't made much noise this season, and have a major goal tender problem. On the other hand San Jose always plays strong during the regular season then disappears in the playoffs. I'm picking San Jose to move on to round two to face the Black Hawks, putting an end to the Luongo era in Vancouver and having us Boston fans rejoice.

The final matchup featuring the #4 seed St.Louis Blues and #5 Los Angeles Kings will also be a great one. St. Louis has been playing great as of late but Los Angeles always puts a fun product on the ice. I say Los Angeles prevails in this one going on to face cross town rival Anaheim.

In the second round Chicago vs San Jose, I have no doubt Chicago takes hand of San Jose.

In the other matchup Anaheim vs Los Angeles. I am stuck in a pickle but I'm going with the upset with Los Angeles moving on to face Chicago.

In the Western Finals I pick Chicago over Los Angeles.

In the #1 vs #8 matchup I think the Pittsburgh Penguins will be too much to handle for the inexperienced New York Islanders, although watch out for John Tavares, if he can get hot Pittsburgh will have a tough time.

In the #2 vs #7 match up or the battle of Canada between Montreal and Ottawa, I can see either team prevailing. Montreal has started to flutter while Ottawa has gained a key piece in Erik Karlson. I think this one can go either way but will go with the under dog because I'm that type of guy. Ottawa in 7.

The #3 vs #6 matchup is also a great one between two Atlantic Division foes Washington and the New York Rangers. Both teams have had their ups and downs but Ovechkin has started to get hot and I believe he rides that into the playoffs fending off the Rangers in 6.

Now the #4 Bruins vs the #5 Maple Leafs the battle of two original six teams and the story line of Kessel vs his old team. I have no doubt that the Bruins win this series. If they play with the fire they have shown in spurts this season I believe they win it in 5.

For the second round Pittsburgh will be too overmatched for #7 Ottawa. If Crosby and Malkin both come back healthy, it's going to be rough for anyone who has to face the Penguins. Pittsburgh in 5 or 6.

For the finals Pittsburgh vs Boston. This one is in heavy favor for the Penguins, especially for the way the Bruins have played in the past two months. However, I'm a believer and I truly believe in this team to get to the cup finals. That is if they show they want it in the first round of the playoffs. If they play like dog crap, then I don't even expect them to make it out of the second round. So hoping that the Bruins light a fuse I pick the Bruins in a physical 7 games to escape onto the Stanley Cup Finals, making Jarome Iginla wish he chose Boston.

For the finals Bruins vs Chicago in another original six matchup. I personally think the Black Hawks will be too skilled to give the Bruins any chance. However, their goal tending is a little iffy and if Boston can stick to their bread and butter they could give Boston another Stanley Cup. I'm going to be realistic and pick Chicago to win the cup in 6.


Now go grow your beards and let's cheer on the Bruins as they try and prove to the city of Boston that they still have it.