2nd Round Here We Come 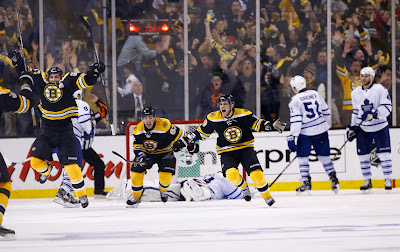 What a night that was. Down 4-1 with about 15 minutes left to go the Bruins pulled off perhaps maybe the greatest comeback in NHL history rallying to the beat of 4 unanswered goals and an overtime win.

Now, the New York Rangers come to town after winning their best of seven series vs the Washington Capitals. The Rangers, much like the Bruins, were on and off during the regular season as the snuck into the 6th place in the East. Down 2-0 in their series, they fought back to even the series at 2 a piece before stepping on the throat of the Capitals last night to a 5-0 victory.

The Rangers are much like the Bruins in the fact that both teams struggle offensively, relying mostly on sound defense and goal tending. It is sure to be a gritty matchup.

The other Eastern Conference series features the Pittsburgh Penguins and Ottawa Senators. The Penguins escaped an upset by the Islanders as they won their series in 6 games. Ottawa stunned the Montreal Canadiens beating them in 5 games. Again, this series should be a great one featuring a lot of goal scoring. If the Senators can rattle backup goal tender Tomas Vokun, Pittsburgh may be packing their bags early.

Out west we have two more great matchups. Chicago takes on Detroit in an original six show down of the Central Division teams, while Los Angeles tries to defend the cup as they face San Jose.

Chicago vs Detroit will have a lot of meaning as the two Central Division foes will be split up come next season due to the re-alignment.

In the California series, the Sharks will try to ride off their first round 4 game sweep of the Vancouver Canucks.

If you love hockey, you are in for a treat these playoffs.