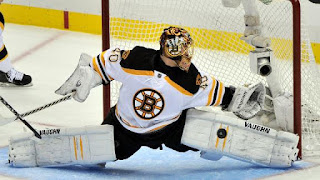 Tuukka Rask and the Boston Bruins shutout the Pittsburgh Penguins in Game 1 of the Eastern Conference Finals Saturday night. If you're a Bruins fan (which you most likely are considering you're reading this blog) this was way beyond a perfect result for the team. No matter how much you believed this team could beat the Pens, everyone knew it would be an extremely tall order. The Penguins are stacked with talent and offensive weapons. We saw the pinnacle of their ability in the first 10 minutes of the first period as they came skating with vapor trails behind their strides. But thanks to a few rings off the post and clutch goaltending from Rask, the B's weathered the initial strike and battled their way back.

Then David "Call me Goliath" Krejci took a pass from Nathan Horton and sneaked a slapshot past the leaky five-hole of TomasVokoun to snag the 1-0 lead early.

And the Bruins never looked back.

Funny thing: before the game started, NBC showed Rask's numbers in the playoffs thus far, and I noticed the '0' in the shutout column. I thought to myself how great would it be to grab that first one in Game 1 versus the 'Greatest Show on Ice.' And whattaya know, Rask played out of his mind for 60 minutes and kept the '0' on the board. He also had a little help from his three red metal friends over his shoulders. Now you can say that Rask and the B's got lucky on those shots, especially the Evgeni Malkin chance in the last three seconds of the first. But you can also say that when a team is hitting so many posts, part of it can be because of the goalie. Players overcompensate by trying to pick corners all the time that they either wrist them high  or right off the pipes due to the fact they sense the goalie is 'playing big.' Rask must have seemed twice the size in net to the Pens last night, and it showed. Rask is playing for his first mega-contract of his career, and despite what Peter Chiarelli wants to already admit, I do not think he has reached that next level of goal-tending in the NHL. He's knocking on the door, however. Raking the Leafs and washing the Rags is nice, but he needs to mount a bloodied and stuffed Penguin head to his wall to solidify his spot as an elite goaltender.


2) The Man-Beast that is "Playoff Krejci" Roars Again 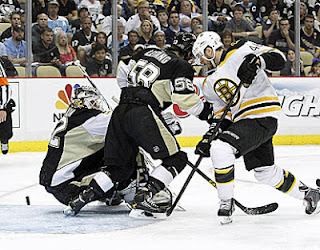 In 25 playoff games in 2011, David Krejci recorded 23 points (12 G, 11 A) and led the entire NHL (yes, even more than the Sedin Sisters) en route to a Stanley Cup Title. This year, Krejci already has 19 points (7 G, 12 A) through just 13 games played. He's scored 66 points in 72 career playoff games. Since 2011, Krejci leads the NHL in playoff scoring with 45 points in 45 games.  Krejci has always been a consistent scorer for the team in his six years with the B's, but when the playoffs roll around, he morphs into a completely different animal. But something not to forget with all of his success is who he rolls with: Milan Lucic and Nathan Horton. When Lucic and Horton both play their physical style, it opens up the space for Krejci to work his magic. All three players share the same big-game DNA. All three have had incredible runs this posteason. And most important, they have played like a first line after not doing so in the regular season. They give teams nightmares when they are trucking down the ice on every shift. And the Pens did not fair so well in dealing with them in Game 1.

Sidney Crosby wasted no time reminding fans why everyone hates him so very much. He may be the most skilled player on the planet, but it doesn't come with a whole lot of dignity and sportsmanship. Giving Tyler Seguin an obvious slash at the ankles, then skating into the box with a look of utter bewilderment just looks ridiculous. He picked a shouting match with Zdeno Chara, but only after he was safe behind the referee. And why even bother bumping into Rask? If he's trying to look tough getting into it with a goalie, it ain't working. And he is already jockying with the media that the refs aren't cracking down on the Bruins and their physicallity. As we know: the Bruins play tougher than most teams. Between the whistles is when the Bruins push and test the mettle to see how much teams can take before they crack. And when other teams give in, they get away from their gameplan. The Penguins took the bait and engaged. And that fueld the Bruins.

Expect the Penguins to come out with even more speed and more fury Monday night (if thats possible). They know they were outplayed in the last half of the game, and they wont be pushed around again in their own buidling. For the Bruins, they hold the advantage on the blue-line and in net. They need to play a carbon-copy of Game 1 if they are to take a  2-0 lead in the series, an impossible thought before it started.