Bruins vs Devils: keys to the game 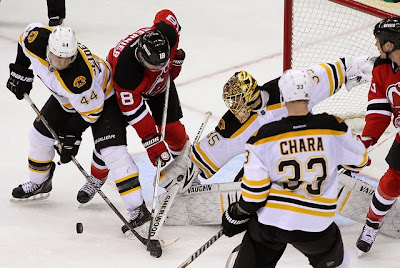 For the first time this season the Bruins will face off against the Devils and their old friends Jaromir Jagr and Michael Ryder. As the Devils adapt to life without Iyla Kovalchuck, the Bruins are also adapting to a new roster.

The New Jersey Devils had to do some rebuilding in the offseason. The Devils two top scorers Iyla Kovalchuck and David Clarkson, both left the team in the offseason. To try and make up for the lack of scoring power, the Devils went out and signed two former Bruins, Jagr and Ryder.

New Jersey also made the most surprising trade in the NHL during the offseason in acquiring Cory Schneider from the Vancouver Canucks. The Devils created a great goalie tandem between Broduer and Schneider. That hasn't helped the Devils much though as they have a 1-5-4 record.

1) Take Chances. The Devils aren't very good this season. Their defense is ageing and the offense cant produce. The Bruins won't have to worry about the Devils lighting up the scoreboard like they did with the Sharks. The Bruins can focus more on offense right out of the gate tonight and try to knock the Devils out of the game early.

2) Defense. The Devils have said that they want to take a lot of shots against the Bruins in a quantity over quality game plan. It makes the most sense for a team with a mediocre offense. The Bruins were able to stave off the Sharks 39 shots on net in Thursday nights game but now Tuukka might need a little help. It would be hard for a goalie to take two 40 shot nights in a row.

Luckily for the Bruins the Devils offense is bad. What they need to try and do is just keep the majority of possession time. If the Bruins control the puck then the Devils cant take shots on Tuukka.