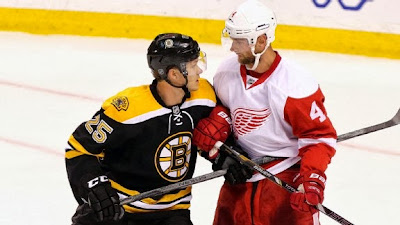 Only five games into the season, the Bruins are playing the Red Wings for the second time. Last time the two teams faced off the Bruins won 4-1 in an impressive game.

Versus the Red Wings the Bruins scored two power play goals both involving Chara either screening the goalie or directly involved in the offense. Torey Krug had a goal and an assist on the power play in his most impressive game of the season.

But the B's have to remember that the Red Wings had just played the day before and were dealing with a lot of fatigue. So what do the Bruins have to do to win?

1) Let Krug Man The Power Play. When Torey Krug is on the ice the Bruins power play looks like it actually knows what its doing. Krug is great at controlling the puck at the blue line and then actually shooting the puck on net. But when the second pairing of power play defensemen come out it just looks bad. Its a lot of passing the puck back and forth and doing absolutely nothing. Krug is young enough and good enough to just stay out for the whole power play.

2) Jump On Gustavsson. Its hard to do anything about Pavel Datsyuk and Henrik Zetterberg. The two are such great offensive talents its hard to ever completely shut them down. So if the Bruins are going to put pressure on someone then it needs to be Gustavsson. Howard had a good game against the Bruins but his defense wasn't there to help him out. With Gustavsson in net this game, maybe the Bruins can get to him early with a quick goal.