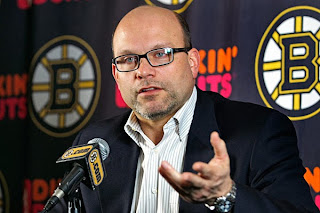 I think we can all agree, for the most part, that it’s been a pretty good start to the season for the B’s. Sure, there are a few things that need improving, but we’re just getting started. It’s supposed to be like that. The Bruins have started off the season with three wins and two losses, and, as of now, (not that it matters at all, so early in the season) stand at fifth in the new Atlantic Division, with twelve goals for, and eight goals against.

The Bruins certainly have some points that have looked very good, like Tuukka Rask , for example (no surprise there). That being said, there’s also some room for improvement, and that’s no surprise, five games into the season. Long story short, it’s nothing to worry about.

“I’m OK,” he said. “Five games in and were 3-2. We’re squeezing our sticks a little bit. (Monday), defensively on those three (Red Wings) goals I didn’t really like our mid-ice fight in the defensive zone. But it’s a work in progress.”“I thought we actually played a hard game,” “Defensively we’ve got new bodies on three lines; you can see some of that filter into the play defensively. But I’ve liked the effort. The result could have been better, but I’ve liked the effort.”


To sum it up, the Bruins played a generally good game against Detroit. They had a lot of good opportunities in a really exciting (and damn good) hockey game, in which the Red Wings just came out on the upper hand.

“Again, I think we’re squeezing our sticks,” Chiarelli continued. “If you look at our shots and chances, maybe not Saturday (in Columbus), and (Monday), the Tampa game, the Colorado game, we’re getting a lot of chances. Our scoring will come. On the power play, we had a lot of control and good (puck) movement. We just have to finish. (Against Detroit), when you’re 0-for-4 (on the power play), with a long 5-on-3 and you don’t score, you don’t feel great about it. But we are getting a lot of good looks. We’re missing the net a lot. We’re not making the plays we should be making."“But I like the personnel and I like the puck movement. I like the spread (setup) and I like Chara in front of the net. That and everything else on the offensive side will come when we start hitting the net in the right spots."


Boston's main shortage has come on offense, in which the Bruins have scored only twelve goals in their first five games. Nobody has really caught good wind yet, possibly because of the new additions to the offensive lines, including Jarome Iginla, who has yet to score a goal, and has tallied just one assist thus far.

“He’s done everything we’ve asked except score,” Chiarelli commented. “He will score. He’s squeezing the stick a little bit. But he’s having good looks and firing a lot of pucks. He’ll come around. He’s always scored over the years. He’ll score.”


Iginla has fought through slumps previously in his career, much like Loui Eriksson, who, right on queue with our article the other night, was credited with his second goal of the season, on a deflection from a Johnny Rocket. Iginla too, is confident he will overcome this mini-slump he is in (but really, it's been only five games. There's not too much to sweat).

“Unfortunately I’ve been here many times,” Iginla said. “It’s all part of the game, and you just try to work hard and keep going and keep getting the chances and always keep saying that the next one is going to go in. Krech (David Krejci) and Looch (Milan Lucic) have been playing great and working hard and I’m trying to work hard with them. And like I’ve said, I’ve had really good chances for a number of games." "“Whenever you win, you never feel as bad; you just shrug it off and say, ‘Next time.’ But whenever you lose by a goal it always feels a lot worse when you know that one of those could have made a difference. But (you) keep going, and like I said, I’ve been here before and you just keep working through it and stay positive and keep trying to get open. Keep believing the next one goes in."


The Bruins return to action tomorrow night, when they butt heads for the first time with the Florida Panthers (and it has been confirmed, Tim Thomas will be playing! (via ESPN)). The game is set to start at 7:30 ET.