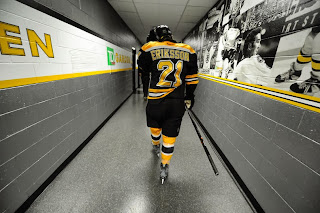 Loui Eriksson was one of Boston’s key pick-ups over the offseason, when they traded away Rich Peverley, and of course Tyler Seguin. On Friday night, Seguin put on a marvelous show, scoring two goals, and tallying four points for the Dallas Stars. On an ironically unrelated note, Eriksson found his stuff the next day, when he put in the eventual game-winning goal for the Bruins against the Columbus Jackets.

Eriksson claims he didn’t have a clue that Seguin, the young forward the Bruins traded away to bring Loui here, had the point outbreak just the previous day, but either way, Eriksson looked like he had something to prove.

Loui admits that he tends to be a slow starter. This could have been a problem this season, with Eriksson, on top of normally being slow out of the gates, trying to adapt to a new team, city, playing style, etc. And of course, with Seguin’s performance on Friday, the chirping of the pessimist birds began. Well, whether intentional or not, Loui quieted them down on Saturday with his goal.

“It wasn’t the prettiest one, but I’ll take it. I was just trying to whack at it." Eriksson said. "It’s good to get the first one,” “I had some slow starts in earlier years too. I knew it would come. When you create chances out there, it will come."


“I thought we did that one today, and was able to find one. It was nice we were able to get the win with that one too.”


The goal appeared to take a lot of pressure off of the winger, who went on to create a handful of chances after it. Alongside his tie-breaking goal in the third, he helped to lead the charge throughout the game, putting up a team-high six shots, and tallying a couple of very good scoring chances, in which Loui could have even tallied a hat-trick, had they gone his way.

Eriksson, who averaged 30 goals and 70 assists in his previous four season with Dallas, might have just found the spark to get him going. His unique shot is one that beats a lot of goalies up high, in which he can quickly elevate the puck, and put it over the shoulder of a dropping goaltender. We saw this ability once in the preseason against Washington, but it had been quiet in Boston’s first three contests, until Saturday night.

Despite the early struggle, Claude Julien has been noticing the little things:

“He was really good tonight: smart plays and he was really competing better." Julien said. " But that’s the stuff that we talked about. You need to give those guys some time to get adjustment and acquainted, and to start to feel comfortable in our room and on the ice," “We talked about the month we wanted to give those guys before we started assessing, but I think we’re also seeing a guy [in Eriksson] that’s finding his stride." "He’s just doing the things that feel right for him. There’s an adjustment on and off the ice, and every day with your family. There’s a lot more than just playing the game. But I saw a guy, no doubt, that had the puck on his stick more tonight than in any of the other games."

Adjusting to a new team is not an easy thing to do. Like Julien said, it's more than just coming out to play the game. It's more than throwing on a different colored sweater. You have to change the way you play, and become a part of the system, and Boston's system is very unique. But Loui looks like he found his spot on Saturday, and we'll look to the next couple games to see if he can continue his exceptional play. 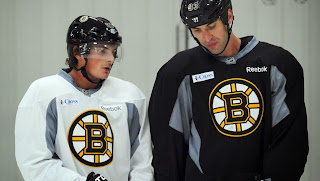 Comment Question: What do you think of the new right winger?
Comment below, and join in on the conversation.