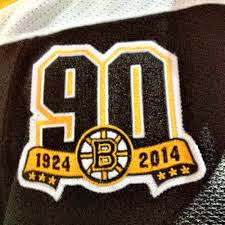 If the atmosphere in the TD Garden last evening for this season's opening tilt against the Tampa Bay Lightning was any indication, the Bruins and their fans have recovered tremendously well from the dreaded "17 seconds" of the 2012-2013 Stanley Cup run. Although not pretty on all accounts the Bruins played to their strengths and notched their first win of the young season with a 3-1 victory. Tuukka Rask was dominant between the pipes. The daily Boston Beatdown was brought to you courtesy of Shawn Thornton and Jarome Iginla. Patrice Bergeron in now required un-tucked fashion dominated the face-off circle as usual and chipped in a goal for the cause. Chris Kelly sported the new "A" on his sweater with great style tallying his first marker of the year on a beautiful penalty shot. And Milan Lucic picked up where he left off in the playoffs driving home the eventual game winning goal early in the second period.

Pre-season pundits seem to be in agreement that this performance is exactly what we should expect of the Bruins this season: physical play, shut-down goal-tending accompanied by stalwart defense and a more potent offense than the past few seasons have produced. But last night's statistics do not reflect this. Boston was out-shot 33-25, out-hit 20-14 and once again produced a goose egg on power play opportunities. The Bruins controlled 54% of the face-offs and, as they did last year, seemed to show more offensive flow when they skated short-handed. Twenty minutes of total penalty time gave them the chance to do that quite a bit. So is this early season effort a preview of what we can expect from the Bruins all season? Is this their 90th Anniversary formula for success? 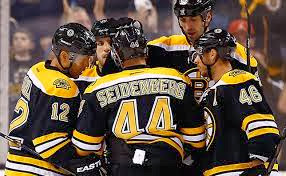 During the Stanley Cup Championship season in 2010-11 the Bruins finished 9th overall with a record of 46-25-11. They were 1st in the NHL with a 1.40 5-on-5 For/Against Ratio, 2nd overall with a 2.30 goals against per game mark and 3rd in the league with a shots on goal average of 32.9 per game. They dominated games at even strength, controlled scoring chances by their opponents and put the puck on net at a high rate. On the flip side they ranked 20th in the league on the power play at 16.2%, 16th on the penalty kill at 82.6% and 14th in wins after scoring first with a percentage of .714. Their special teams struggled and they allowed teams opportunities to get back into games with great frequency. This formula resulted in the hoisting of the Stanley Cup.

The 2012-13 version of the Big Bad Bruins wrapped up the lockout shortened campaign 6th overall with a 28-14-6 performance. They finished 4th in the league with a 1.28 5-on-5 For/Against Ratio, 3rd with a 2.21 goals against per game mark and 2nd sporting a 32.4 shot on goal per game average. These numbers practically mirror those posted two seasons earlier. Unfortunately the power play plummeted to 26th in the NHL at 14.8% and the tendency to let teams back into a game after taking an early lead hovered around the same mark at a league 12th .731 percentage. The upside saw the penalty kill rise to 4th best at 87.1%. This formula left the bad taste of a Stanley Cup Championship loss in our mouths. 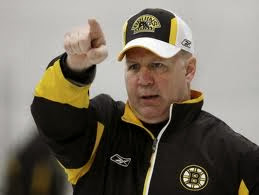 Professor Claude Julien needs to concoct Formula #90 keeping five main components in mind: offense, defense, special teams, rookie impact and the add-on veteran. Offensively the Bruins need to continue their face-off dominance and to pound pucks at the opposing net. Along with strong short-handed play and maintaining 5-on-5 dominance, the offensive element of the formula needs very little tweaking. The defensive drop in the ointment requires the goals against per game average to hover at the 2.21-2.30 mark. With the stability of the blue line leadership and Tuukka protecting the twines there is little reason for worry here.

Special teams may provide the biggest challenge. Even though the penalty kill has greatly improved, the power play is abysmal. Formula #90 must have an injection of increased production when the ice is tilted toward the opponent's net. The add-on veteran presence this year is Jarome Iginla. The long-time Calgary Flames captain brings leadership, physicality and serves as a true scoring threat. In 2010-11 Mark Recchi served in this role providing solid ice time, rugged center ice play and inspirational leadership on and off the ice. Jaromir Jagr arrived late to the fold last year, but the gas in his tank seemed to fade to fumes as the playoffs ran deeper. All signs point to Iginla's infusion as a healthy addition to the formula. 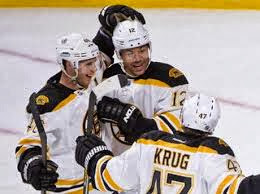 Rookie impact could be the sweetener that flavors the formula just right. Although not true rookies, Dougie Hamilton and Torey Krug have earned their stripes and will have the opportunity to contribute nightly on the blue line. Will the likes of Ryan Spooner and Bobby Robins rise from Providence to make an impact at some point? That may be a mid or late season addition to the formula with results to be determined.

Lately the Bruins have had a formula for success. 2011's version resulted in the hoisting of a championship banner. Last season's potion lost its potency a tad too soon. Let's hope Claude Julien's mix this year finds the Bruins drinking Formula #90 from Lord Stanley's sweet, silver chalice. 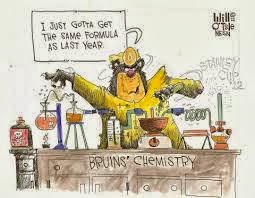