I'll have some more Merlot, please 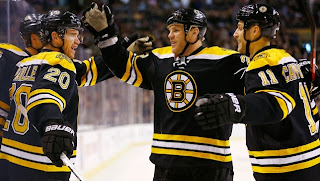 The Boston Bruins have a few key qualities that keep them as a contender for the Cup year after year. The B's thrive on a surplus of heart, skill, determination, focus, work ethic, character, and of course, depth. These are just a few key terms that could be pinned to the eight-spoked B, but they distinguish the club that takes the ice in Boston right now.

The last term mentioned there - depth, has a lot of applications. You could say that the Bruins have a good mix of youth, and veterans, or that they're strong both offensively, defensively, and between the pipes. But here, we're looking at the Boston line depth.

The Bruins fourth line of Gregory "Soupy" Campbell, Daniel Paille, and Shawn Thornton, commonly known as the Merlot line, (coming from their "Merlot" colored practice jerseys) is arguably the most effective fourth line in the National Hockey League. People often mistake the word "productive", and jump straight to the goals column, but the Merlot line's productivity goes way beyond lighting the lamp. 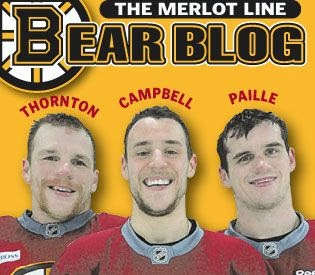 The well beloved fourth line didn't earn their stars (or spokes, if you will), by constantly putting the puck in the net. They've found their place in Boston hearts by showing up to every second of every shift, and playing with well more than one-hundred percent effort. These guys grind it out, fight every battle, throw their weight around, and get their hands dirty to produce for the B's. They constantly set the tempo, and keep everyone else, including the fans, and even the rest of the B's from straying away from the goal of the game. Whether this line's out there up ten to nothing, or down twenty to nothing, they'll put themselves on the line without second guessing it for a second, like we saw last season with Gregory Campbell's injury.

Why do they it? Because that's their job, and because they care. The Bruins fourth line brings something to the game that is so hard to match, something that rallies the troops, and makes the other team submit to the Boston playing style. They crack down on their opponents, they set a the pace, play the body, and find ways to score some goals, too.

It's this extreme playing style, matched with the willingness, even the eagerness of the members of the Merlot line that earns them their ice time, which is generally high for a fourth line, and earns their participation in some situations that other teams wouldn't dream of putting their fourth line out on the ice for.

The guys on this line know that.


"Every day we talk about trying to be at our best, be consistent." said Shawn Thornton. " When we’re skating and when we’re getting pressure, we’re getting chances and helping this team. If we can take a few minutes away from the big boys so that they’re a little fresher and a little more effective, that’s what we want to do"."Our chief goal is not to get scored on and to create some energy. We want to continue to do that."


Gregory Campbell also chimed in about how he feels the Merlot line helps his team, and particularly the role they played earlier this Spring in the playoffs.

"I thought we were the difference in a lot of games,"Soupy said. "We as a line take a lot of pride in this. We are the first ones to point out that there are no superstars on our line, but the role we play is very important.“Oftentimes it doesn’t show up on the scoresheet. It can be a shift that changes momentum; it can be one play; it can be a couple of chances; it can be a fight, a hit; it can be a number of things that turn the tide over the course of a game. “As a line we’ve been fortunate enough to be together the last three years. We’ve been able to create good chemistry. It’s about building on that and continuing where we left off last year. We have to be playing well in order to earn our ice time. That’s fine with us. We want to hold ourselves accountable."


Despite what some people would call a "slow start" to last season, the Merlot line found their footing, particularly in the playoffs, when they, once again, we're a huge part of the Bruins playoff run. Coming into this season, they're determined to pick up right where they left off. These guys know their role on the team. 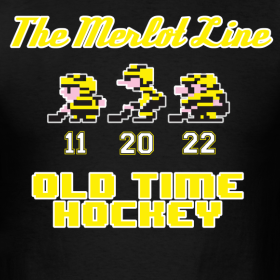 "We take pride in it,” said Shawn Thornton. “We want to be able to contribute, we want to be able to play. With us, if we’re not going (playing well), we’re probably not going to get the minutes. “The first game (of this season), we’d only played one game in the preseason — it’s not an excuse — but I think we were still trying to get our timing back. The last game I thought we felt a lot better "

“We spoke before the start of the season,” Julien said. “I thought last year they had a slow start. I told them it was important that they have a better start this year. Even though sometimes they don’t always score, they do more than that: Whether it’s penalty-kill — two of those guys — or when we come up flat, they’re the ones sometimes who give us some life just by their forecheck and creating things. They have to take pride and understand that they do play a big role on our team.”


So I would expect to see a lot of production from the Merlot line. These guys are at the heart of this Boston team, and constantly find ways to lead the team, and to do their job, whatever the cost. So fill our glasses up a bit, will you, and what do you say? - I'll have some more Merlot, please. 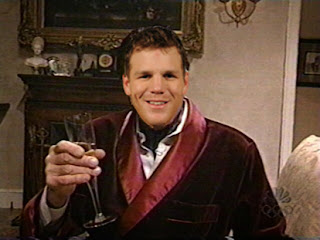 Comment Question: Why do you love the Merlot line?
Thanks, and as always, feel free to comment below to join in on the conversation.