Power play back to normal in Boston

Two games into this now five game old season a lot of us were calling the Bruins’ power play a success. They had finally found the formula for the problem that was unsolvable these last few years. With the big man Zdeno Chara working the front of the net, and offensively gifted Torey Krug working the point with playmaker David Krejci. Flanking Big Z on either side were two other big men in Milan Lucic and newcomer, powerful shooter, Jarome Iginla. 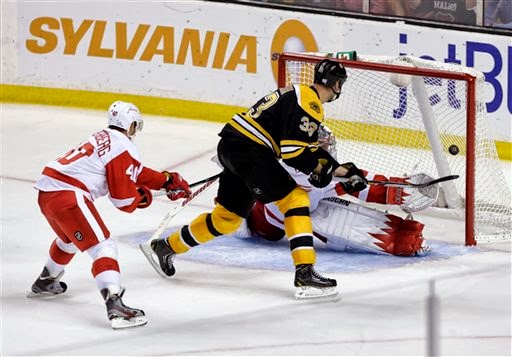 In the three games since the power play had been deemed “fixed” the Bruins are back to their old ways going 0 for their last 12 PPs. This is including the five on three two man advantage they had in the third period of Monday’s matinee loss to the Detroit Red Wings. Coach Claude Julien went as far as to call a timeout before the power play started to ensure everybody knew their rolls and the strategy to make sure a much needed goal was scored. At the time the Bruins trailed 3-1. Julien even shifted the first unit power player’s positions putting the heavy shots of Chara and Iginla on the points.

The unsuccessful power play hasn’t been from lack of trying, nor has the team’s two losses out of their last three games. They are getting chances and putting pucks on net, they just aren’t going in. Julien commented on the recent goal scoring struggles.

We’re really struggling with our finish lately. It looks like we’re feeling the pressure of scoring goals and they’re not coming easy. So it’s been like that. Even the game in Columbus, took us a while to get going there, obviously Colorado.

The game against Detroit alone saw the B’s get 30 shots on net, 22 shots blocked by the Wings and 17 shots that made it through but missed the net. That adds up to 69 opportunities to get one into the net. The boys are rippin’ ‘em, they just ain’t goin’ in.

Say what you want about it, if they don’t go in they don’t count. Krug understands that and knows that it may be time to get a couple down and dirty goals just to break the streak.

We didn't score goals. That's what we're judged on. They can say we had great puck movement, but that doesn't matter because our job is to score goals and get momentum for our team.
It seems to be a tendency of whoever is out on the power play, we like to make the pretty play, and sometimes that's not what it takes. It's just, something ugly, get it to the net, and let those guys go to work.

It’s kind of funny I was saying the same thing towards the end of the third period Monday afternoon. Just get it to the net and maybe something will happen. If you can get it down there, in somebody’s feet, it might pop loose, it might get inadvertently kicked in by your opponent or the goal tender or something. There were some scrambling opportunities but I felt there was a lot of puck movement around the offensive zone without a lot of movement towards the net despite the 69 combined shots, misses and blocked shots. If it takes 40 shots on net a game to break through this little scoring slump, then take the 40 shots. Don't wait around looking for the perfect opportunity, it may never come.

Let’s just hope the Bruins know why they aren’t scoring and have an idea about how to fix it. In years past when the power play hasn’t worked Julien has trotted out the same old lines for months at a time without a change and without success. I just hope they either make a change in personnel or strategy before things get too out of hand. The good thing is that they have their five on five play and their success in that regard to fall back on.