Bruins vs Canes': keys to the game 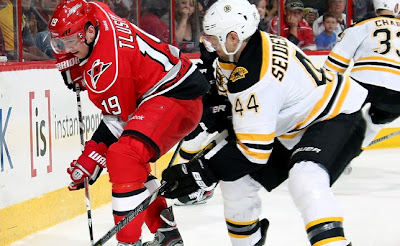 Its time for some matinee hockey at TD Garden as the Bruins get set for a 1 o'clock game against the Carolina Hurricanes. The last time the two teams faced off was this past Monday and the Bruins won 4-1 in what was considered a rebound game from the Ottawa Senators loss.

The Canes' have only played one game since that Monday night game against the Bruins. They lost to the Detroit Red Wings on Thursday 4-3. That was their third loss in a row and tonight they look to avoid their fourth and maybe they're looking for some revenge as well.

Moral of the story is, the Canes' still aren't a good team. They're getting there but they aren't quite there yet. The Canes' may come out with a lot of energy and emotion but the Bruins just have a more talented team.

1) Weak Defense. The Canes' defense is weak. How weak? Well now they are looking to trade two of their forwards just to get another solid defenseman. I said it in my keys to the game last Monday against this team, the Bruins should be able to capitalize on a weak defense.

2) Strong Centers. The Hurricanes do have one bright spot and that is their strength at center. They actually rival the Bruins with their depth and strength at center. The Canes' have Eric Staal, Jordan Staal, Manny Malholtra, Jiri Tlustly, Tuomo Ruttu, guys that all play center or can play center and play it well. Its not really a key to the game, its just something the Canes' can feel good about, and something the Bruins should expect and prepare for.