Bruins vs Habs: four things to look forward to 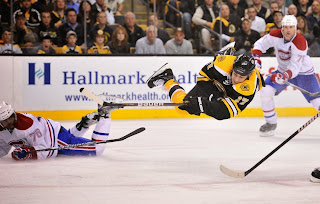 1) Rivalry. Obviously one of the best aspects of a Bruins vs Habs game is the history of the rivalry. Since the beginning of the league the Bruins and Canadiens have played each other and after nearly 100 years the rivalry is intense.

2) Hatred. For diehard fans the best part of these games are the hatred. The fans hate each other, the players hate each other, and the upper offices hate each other. Want to know how intense the rivalry is? Or maybe just how insane Canadiens fans are? After Chara's hit on Max Pacioretty, Habs fans called the Montreal Police Department and there was even an investigation done on Chara.

Need more? Even our sports casters hate each other! When Felger and Mazz called into a sports station in Montreal, the two stations couldn't even stand each other long enough to argue the sport, and the Habs fans hung up the phone on Felger and Mazz. Read more here.

3) Talent. Right now the Bruins are one of the best teams in hockey. The Canadiens? They are right up there with the Bruins. The B's bolster a 19-7-2 record and the Canadiens have a 16-9-3 record. The two teams aren't far off. That means that this game that is going to be a heated rivalry game, will be an evenly matched heated rivalry game.

4) Rask vs Price. As Bruins fans we will probably see a lot of this match up for years to come. Rask and Price have both earned their spot in the league as young elite stars. Yes Boston, Tuukka is a star. So far this season Tuukka Rask is 14-6 with a 1.90 GAA and a .935 save percentage. Carey Price on the Canadiens side has a 12-8 record with a 2.00 GAA and a .937 save percentage. Its a great goalie match up for a great game.