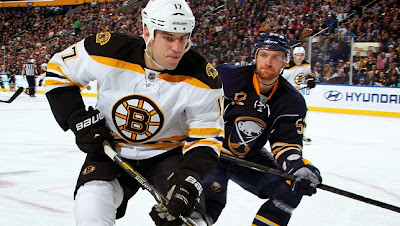 There isnt much to look forward to in this game unless you loved Vladimar Sobotka. Yes the guy we traded Sobotka for, David Warsofsky, will be playing defense in tonights game. The offensive defensivemen will try to prove his own paired with Matt Bartkowski.

1) Sabres Suck: Ya, to put it bluntly, the Sabres suck. Theyve been trading players for picks and bringing up young kids to learn the game. With that said the Sabres are really bad now. They are last in the Atlantic and just want the offseason to hurry up. If the Bruins lose tonight it'll be embarrasing.

2) Lets The Kids Play: There isnt a better time to let the call ups from Providence get some extra ice time. It would be nice to see more of Johnson, Spooner and Cunningham. Of course itll be nice to see Warsofsky play and see if the Bruins can keep turning out young good offensive defensemen.