Bruins vs Sens: keys to the game 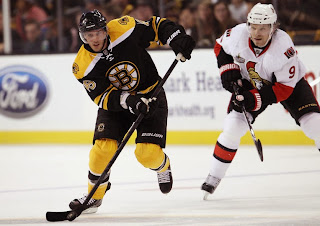 The Bruins are in Ottawa to play the Senators for the second night in a row. Tonight though there will be a few different pieces in the Bruins lineup. Including in net, when Bruins fans will finally get to see last years AHL goalie of the year, Niklas Svedberg, that is if Julien stays true to his word.

But its not all rainbows and butterflys for the Bruins as neither Dennis Seidenberg or Carl Soderberg made the trip to Ottawa with the team. The Bruins made an emergency call up for Nick Johnson and David Warsofsky who NESN called in their recent article a "forward". Good job NESN.

1) Smith. Reilly Smith: Reilly Smith leads the Bruins with 14 goals and has 16 assists to go along with it. With Seguin gone, the Bruins were lacking speed and scoring, as you probably remember Seguin was the leading goal scorer last season. Smith has stepped in though and saved Chiarelli's beautiful bald head from rolling.

2) So, You Think You Can Skate?: Ryan Spooner is becoming a fan favorite. Spoons caught the eyes of fans last year with his flashes of offensive brilliance. This season the story is no different. Spoons brings an element the Bruins dont have much of anymore, speed, and its making the guys around him like Soderberg play much better. If Spoons puts up some points tonight and in the next few games, he might keep the third string center job.

*When he gets his first hat trick, Spoons has to be thrown in place of hats, its only right.