The Neal Deal: Another look at Neal's kneeing

In the midst of a hockey game that was spiraling out of control, Penguins winger James Neal figured it would be alright if he arranged a little meeting between his knee, and the head of Brad Marchand.
A lot of the time, these kinds of things are hard to judge. When a player makes this sort of contact to an unaware opponent, an injury (and an ass kicking) are likely to trail quickly behind. Surprisingly, neither of those two occurred. However, earlier today, justice was served, as the league suspended Neal for five games.

Let's take a peek at this incident here:

As seen in the video below, Neal begins toward the lower section of the Boston zone, circling towards Brad Marchand, who possessed the puck. As Marchand is tripped up near the far boards. he loses control of the puck, and is left on his hand's and knee's, preparing to get back up on his feet. Neal, who was a very good distance from Marchand, began "back-checking" to get back into the play... or at least it seemed.
As Neal approaches Marchand, he clearly looks down at him, turning slightly toward him. It is here that you can see Neal turn and extend his leg, deliberately making contact with the head of the defenseless Brad Marchand. 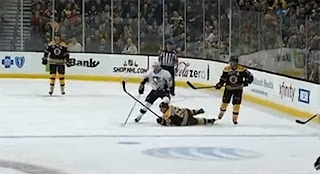 Not only did Neal make no attempt to avoid Brad Marchand, he literally turns toward his victim, and delivers the blow to the head. Had he continued his original path, he wouldn't have come close to making contact with Marchand. However, instead, Neal opted to turn toward Marchand, and blatantly knee him. He then continues to pull the "nothing just happened here" trick, and nonchalantly skates away.
Thankfully, Marchy was only shaken up, and had wasn't injured on the play. And had things gone a bit differently just moments later, you might have seen Neal face a bit more of the "player's policing" that has become the talk of the town of late. However, this opportunity was denied following the ensuing scrum, which carried Brooks Orpik out of TD Garden on a stretcher.

After the game, Neal said:


"I was skating by him, I hit him in the head with my leg or my foot or my knee or my shin area; I don't know. He went down. I guess I need to try and avoid him.
"I need to be more careful and get my knee out of the way. I'm not trying to hit him in the head or injure him or anything like that."

Hmmm... let me know what you think, does this look like Neal "not trying to hit him in the head?":

After seeing the incident multiple times, I can't help but to be reminded of one our all-time favorite moments while Tim Thomas was between the pipes for the B's, in which he had a friendly exchange with Sean Avery....(Boy, I would not want to have been Fredrik Sjostrom right here):

To see more on the suspension, including Shanahan's explanation of the play, see our earlier post