"Find an excuse to let one of these off the chain, and I personally guarantee you the bad guys won't even want to come out of their caves."

Robert Downey Jr.'s character was speaking of the Jericho Missile in the movie Iron Man, then he launched one and all manner of holy hell broke loose - horrible beatings, espionage, intrigue and, of course, in the end the good guys win... 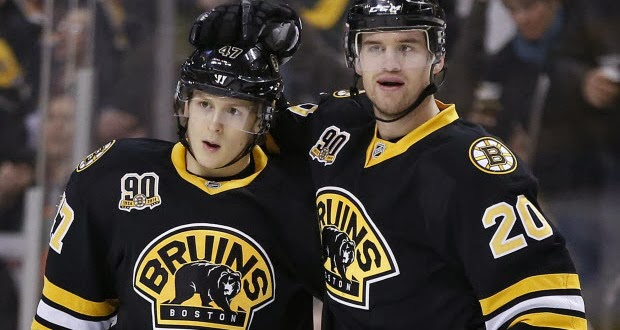 ...Torey Krug isn't some mythical super hero, but when he finds an excuse to let one of his patented "Krug Missiles" off the chain, the bad guys generally find themselves scrambling.

Only four Bruins have taken more shots than the demure rookie blue liner, who ranks sixth on the team in scoring, his two goals on Saturday night leading Boston to a 4-1 win over the Winnipeg Jets at TD Garden, and also making him the sixth Bruin to score double digit goals on the season.

Krug is one of a trio of Bruins' defensemen whose shots elicit fear and loathing from the opposition in the attacking zone, joining veterans Zdeno "The Condor" Chara and Johnny "Rocket" Boychuk whose blue line bombs leave nothing but a vapor trail and bruises in their wake.

The win was the second straight for the Bruins, raising their record to 28-12-2, the 58 points good for a 4 point bulge for first place over the Tampa Bay Lightning in the Atlantic Division and remaining within three points of the Pittsburgh Penguins - who are running away with the Metropolitan Division - for top spot in the Eastern Conference...

...which is important, given that Boston is about to engage in a swing through California starting on Tuesday in Anaheim - a three-game gauntlet that includes the Pacific Division leading Ducks, their cross-town rivals Los Angeles Kings on Thursday and finishing up on Saturday in San Jose against the Sharks.

What makes this Cali-stretch most difficult is the fact that the teams have combined for only six regulation losses on their home ice, with Los Angeles suffering five of those.  The Sharks are 15-1-3 in San Jose and the Ducks are a ridiculous 16-0-2.

So, the Bruins have their work cut out for them, as all three offer different challenges - but certainly are in no position to dictate terms to the Boston, so long as the Big Bad Bruins bring their physical game.

Anaheim is strong on both ends of the ice, ranking #3 in the NHL in both shot accuracy and goals scored, and defensively offer up the eighth rated defense in terms of goals allowed - so there's little need for explanation for their 65 points which leads the Pacific Division and is just one point shy of the Western Conference leading Chicago Blackhawks.

The Kings lead all of the NHL in goals allowed and their goaltending is #2 in save percentage - and normally one would expect that with All World stopper Jonathan Quick between the pipes, but this season it's been mostly due to their backups as Quick has been on the IR since early November with a grade-two groin sprain, but returned on Saturday night to earn a 3-1 victory over San Jose...

...the Sharks sporting the fourth rated goals against average and lead the league in shots on goal, but also have lost their sensational scoring rookie Tomas Hertl for the rest of the regular season at least - so it is imperative for the Bruins to bring their physical defensive game with them to the west coast, along with the same 60 minute effort that helped them flatten the Jets on Saturday afternoon to take advantage...

...and Krug breaking out of a personal-worst 11 game scoring skid couldn't come at a better time - as well as the conclusion of tough-guy Shawn Thornton's suspension, the 14th and 15th games of which are at Anaheim and Los Angeles, respectively, meaning that he will rejoin the team in San Jose - humbled, but hopefully rested and ready to lay some legal licks on the slick skating Sharks.

But it doesn't end there, as the three game whirlwind through the Golden State is just the beginning of a stretch that sees the Bruins playing seven of nine on the road, with trips to Dallas, Chicago, Philadelphia and the Island on the itinerary before the Bruins get any extended home cooking.