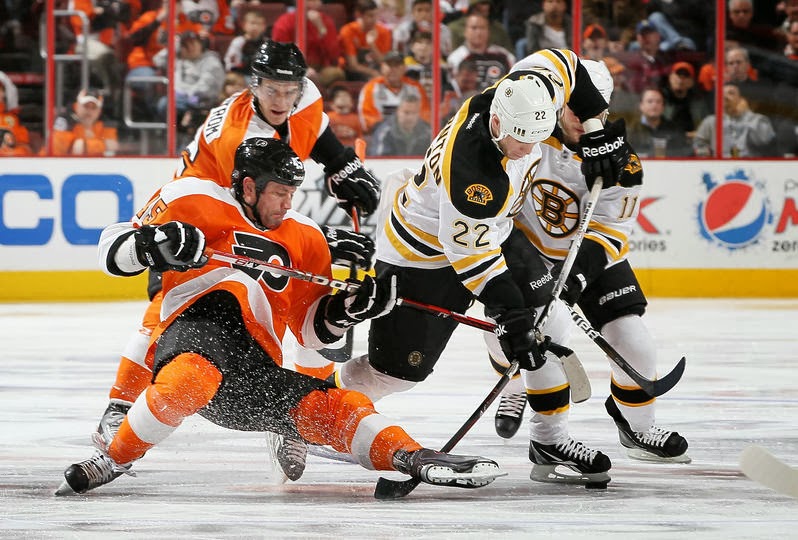 After a long break for the Bruins, the team is in Philadelphia to play the Flyers. This Flyers team isn't one Bruins fans might be used to facing. The Flyers are usually a great team fighting for the top spot in their division. This year though, like last year, they are mediocre.

The Flyers already fired their head coach, Peter Laviolette, back at the beginning of the season. Somehow the GM was able to keep his job, and he celebrated recently, by giving Steve Mason a three year extension in which the goalie (2.57 GAA, .915 Save Percentage) will make 4.1 million a year.

But that's enough trashing the Flyers front office. The nucleus of the Flyers team is still very good despite the GM's efforts. If the Bruins don't play well then the Flyers definitely can beat them.

1) Spooner: Chris Kelly is ready to come back soon. This might be the last game for Ryan Spooner to prove why he deserves the job. Knowing Claude, it will take a lot for Spoons to take the job from a veteran like Kelly, and that probably isn't a bad thing. Spoons might come out and have hist best game yet.

2) Miller or McQuaid: With his new one way deal, Kevan Miller is a threat to Adam McQuaid. One of them has to step up to see who will be around for next season and they both need to play at the top of their game to fill in for Seidenberg.  It looks like McQuaid will miss this game though. So its Millers time to shine in Philly.