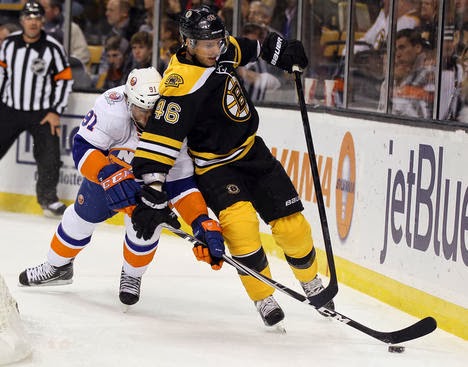 The Islanders are starting to re-surge in the NHL playoff push and if they make a move for a goalie or defenseman, they'll be right at the thick of things. So, needless to say, this is going to be a good game tonight between the Isles and B's.

The Bruins also have pride to play for because if they lose tonight than they will be swept by the Islanders this season. Sure the Isles are a re-surging team, but they aren't the best in the league, and the Bruins are on of the best. So pride is a factor in tonight's game.

1) Weak Goal Tending: The Islanders weakest link is their goal tending. Evgeni Nabakov and Kevin Poulin have been mediocre and the Islanders need more if they want to make the playoffs because the Isles defense certainly can't bail them out. If the Bruins play strong defensively they should be able to transition well offensively and pick apart Poulin as well as the Isles defense.

2) High Energy: The Islanders have a lot of young, fast, high energy guys like Grabner, Tavares, Okposo, and Martin which are great threats and then of course Thomas Vanek who is like an anchor for that offense. The Bruins can't overlook this team or their style of game play.