The Boston Bruins apparently are happy with their roster as-is.

And why shouldn't they be? They can roll four productive lines and have a seemingly endless supply of young defensemen at the AHL level to support one of the youngest blue lines in the league at the NHL level - save greybeard Zdeno Chara - which is apparently nerve-wracking to many fans and particularly the media, who have been speculating that the Bruins would acquire a veteran blue liner in the wake of the season-ending knee injury to Dennis Seidenberg... 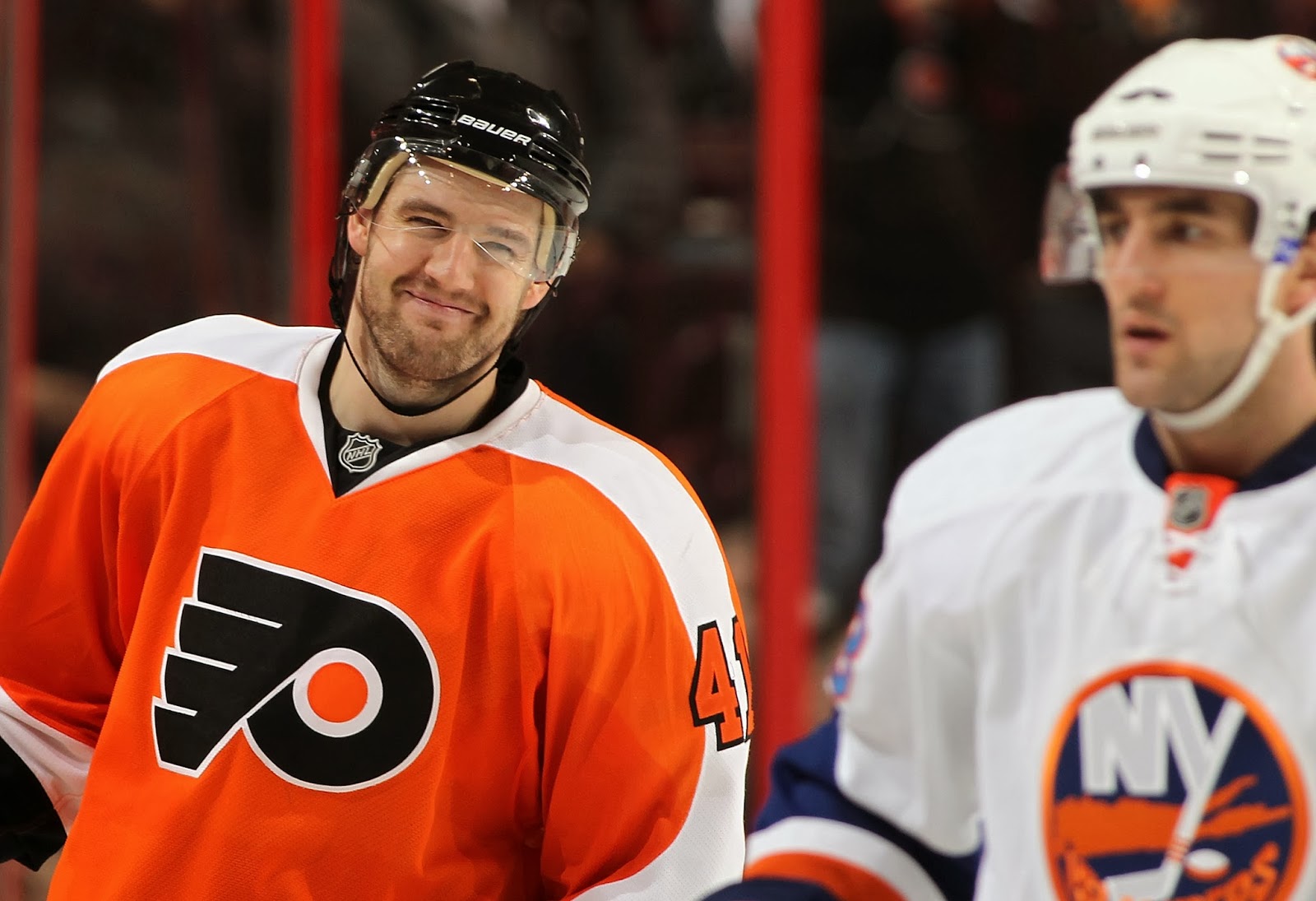 ...and they did summon a couple of them in the last hour of the trade deadline, but with none of the pomp and ceremony created by other contenders - and not nearly as big a splash as nemesis Montreal pulled off in the waning moments by absolutely throttling the New York Islanders, giving up a conditional second round draft pick and 2012 overall draft pick Sebastian Collberg for Bruins' killer Thomas Vanek.

The Bruins sent a third round pick to Philadelphia for veteran defenseman and Chara's Olympic teammate Andrej Meszároš, similarly built to Seidenberg with a lefty shot, is four years younger than the German Hammer with slightly more offensive production to his game.

Since Seidenberg went down with a torn ACL, the Bruins' penalty kill has suffered to the point that the units went from third best in the NHL to third worst in the space of twenty games - a point of contention with youngsters Torey Krug and Dougie Hamilton handling the duties at present - and it is unclear what part Meszároš will play on the PK, but he can handle both sides like Seidenberg did.

Meszároš was a healthy scratch many times for Philadelphia early in the season, the local rags citing inconsistency in his game as he attempted to find his form after dealing with shoulder injuries last year, but he started to come on with more playing time, scoring five goals and dishing out a dozen dimes in 38 games while logging just over 17 minutes of ice time per game.

The Bruins had expressed interest in Meszároš earlier according to various published reports on Saturday, and it was speculated that Chara had been giving the front office a nudge to bring in his fellow countryman, who performed well opposite Chara at the Sochi Games - and with Meszároš being a potential unrestricted free agent, he could become more than a cheap rental for the Bruins going forward.

Bruins' general manager Peter Chiarelli is also familiar with the rugged  6' 2", 225 pound Meszároš from his days as the Ottawa Senators' assistant general manager during the 2006/07 season when the then rookie enjoyed his finest season in the NHL with 39 points and 61 penalty minutes while playing in all 82 games.

Meszároš also played for Tampa Bay before lining up in Philadelphia, but has never matched the success that he enjoyed in Ottawa.

Boston also claimed a defenseman off of the waiver wire, right-shooter Corey Potter formerly of the Edmonton Oilers.

A career minor-league journeyman, it's difficult to assess how Potter fits into the Bruins' plans other than depth on the back end with the increasing probability that top six blue liner Adam McQuaid will be shut down for the remainder of the season.

Back up goalie Chad Johnson offered some insight on the anonymous Potter, whom he played with at AHL Hartford five years ago:

“He was just a real steady D man,” Johnson acknowledged. “He just had a presence back there. At least in the minors, he was just calm, made really simple plays. He isn’t a guy who’s going to make bad decisions. He’s just real steady. He’ll fit in perfect with the D corps here.”