Bruins vs Canadiens: game 5 - this series is insane 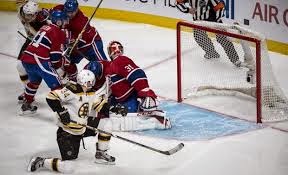 Its a warm day in Boston, not exactly hockey weather, but the heat fits right into this series. Things are starting to boil over between players and its showing on the ice. It was a nail bitter in game four, a 1-0 victory for the Bruins, and that stress level will probably continue for us fans.

1) Claude Needs To Do Something: The Krejci line is playing awfully. Anyone can see it. So the solution is to shake up the lines a little bit. It doesn't have to be long, it could just be a period, but Krejci needs someone like Smith on his line who is skilled and can finish. Lucic and Iginla just haven't been up to par, they may need some more motivation.