Spezza wants out of Ottawa, where's he headed? 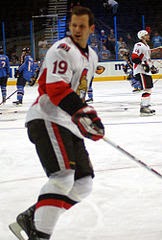 Senators captain Jason Spezza has had enough of Ottawa. Prior to Game 4 of the Stanley Cup Finals on Wednesday, Senators GM Bryan Murray announced that Ottawa will follow through with Spezza's request to be traded, telling reporters:

“He requested we give him a chance to go elsewhere,”


Spezza served in Ottawa for eleven seasons, and is approaching the final year of his contract, which will come with a $7-million cap hit. As James Mirtle of The Globe and Mail observed, Spezza's offensive abilities have declined of late, and he isn't extremely strong in his own end, either, meaning that the veteran center may be a tough piece to move.

So where will Spezza end up? Well, it's tough to say...While talking to the press, Murray also added that he hopes to:

“send him somewhere we don’t have to play [against] him every night.”


Mirtle sees two possible trade-partners in the Anaheim Ducks, and the Nashville Predators. Others beleve he may be headed to St. Louis or Chicago.

In addition, Spezza gave Ottawa a list of ten teams which he did not want to be traded to. Stay tuned for more info on Spezza, and other NHL news.