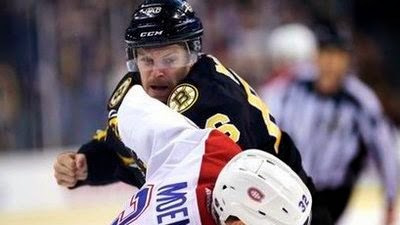 Not too long ago, we saw Shawn Thornton walk away from the Bruins. Whether you liked it or not, it happened, so it's time to adjust. With Thorty gone, the Bruins have yet another hole to fill: the enforcer...right?

Well, maybe not. They say the enforcer is a dying breed in hockey, and it appears the Bruins may head into the season without one.

Now that's not to say the Bruins aren't going to be tough. That's the opposite of what's being said here... the Bruins don't need an enforcer because they are tough. Look at the B's blue-line alone... Adam McQuaid has thrown his fair share of punches, and I think we all remember what Kevan Miller did to Travis Moen last season. Not to mention the 6' 9" monster that can rip apart the majority of the league with his pinky toes.

How about the forwards? Well... there's always Milan Lucic, if you feel like dealing out some real damage. A few lines down sits Gregory Campbell and Daniel Paille, who also pack a punch. So when the Peter Chiarelli says that the toughness is there, he's not kidding:


And while it's true that we'll miss Thorty, the Bruins will be fine.