If Bruins miss playoffs... who is to blame?


For the first time since the 2006-07 season, the Boston Bruins seem to be lacking some extra gas in the tank and could miss a chance at capturing Lord Stanley's cup. A constant roller coaster ride of a season that seems to be ending with one final plunge into the depths of failure. There's a lot of blame that can be tossed around and everyone loves to point fingers when something disastrous happens, always seething for an answer. So who do we point the finger at?

The worst offenders are the players. Consistently echoing cries of desperation with less than ten games remaining, the players are the one's lacking the effort. It can be seen in plain view.. the pure unwillingness to get after the loose puck, to backcheck and make the defensive play that doesn't sink the ship. Not only is their lackluster performance blatantly shown, the numbers on paper even tell a frightening story. The only Bruin who could reach a plus/minus of 20 was Kevan Miller, who has been out for quite some time with a shoulder injury. Here are some comparisons from last year to this year in plus/minus: 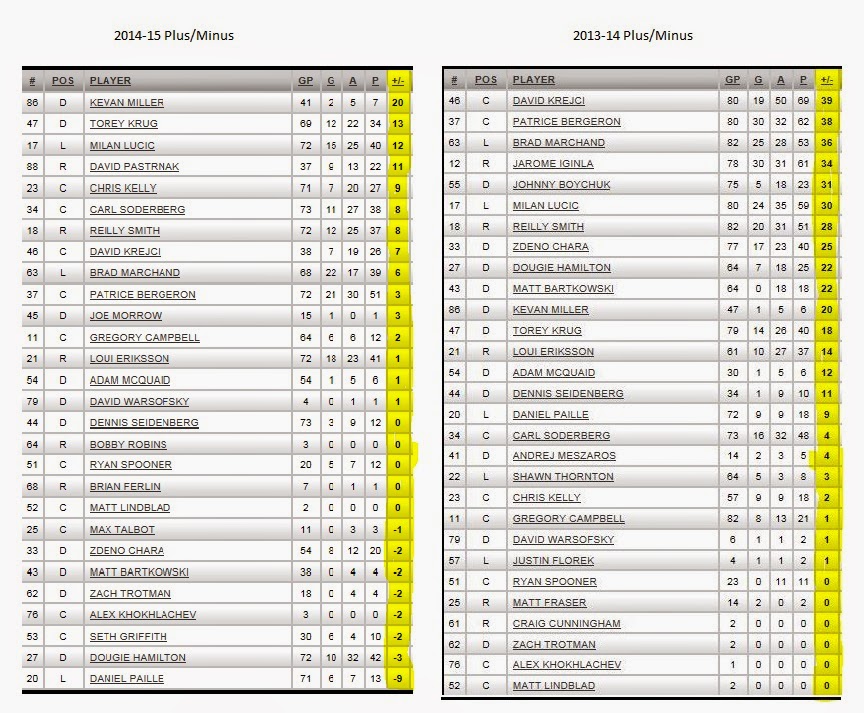 The numbers tell their story in the graph above. Not only in plus/minus, but in overall point production. What they also lack in point production, they lack in physicality. When you go to a game at the TD Garden, what do the Bruins show you before coming onto the ice for puck drop? A highlight reel of fast, smart hockey with hard crushing hits. So what's the highlight reel going to look like this season? Where's the Milan Lucic that would run people through the glass? Where's that intimidating style of hockey the Bruins used to wear as if it were a badge of honor? Not only is Kevan Miller your leading plus/minus player, he seems to be the only one around who wants to punish a player thinking he can skate into defensive territory. Physicality gives you energy, momentum, and hunger. Teams feed off of that energy and that's just one of many things the Bruins haven't found in their arsenal this season.

The roster has not changed that much other than a couple of trades, however, it's not an excuse. This roster has had the experience and can usually find the determination and persistence to be a better hockey club. The problem seems to be the chemistry right now among everyone in the group, which ultimately stems out to the coach and upper management. Even though Chiarelli has made more than a couple of questionable decisions, the Bruins are a better team than the bottom half of the Eastern Conference and shouldn't have to worry about missing the playoffs.

Looking back just weeks ago, it would be crazy to even mention the Ottawa Senators overtaking the Bruins for the final wild card spot. That happened last night as the Senators toppled the Sharks, 5-2. Andrew "The Hamburglar" Hammond has truly rejuvenated the Ottawa club after a head coaching change was made mid-season. Because of that head coaching change, the Senators have become the feel good story of the NHL. As a Bruins fan, I cringe when I hear we have gotten bumped from our playoff spot. As a fan of hockey, it is absolutely mesmerizing to watch how the story will unfold. The Hamburglar has taken points in all 15 games he has played and has yet to be beaten in regulation. Threatening another NHL record for consecutive games with points, Hammond is making a case to become one of the NHL's next best goaltenders. Not only has a young goalie been a key to their success, the rest of the young talent has hit the ground running in Ottawa. Mike Hoffman, Mark Stone, and the latest emergence of Jean-Gabriel Pageau have propelled the Senators to their success, playing excellent two way hockey and creating edge-of-your-seat offensive plays.

With only nine games left on tap, it's put up or shut up for the Bruins. You can read more about their do or die situation here.