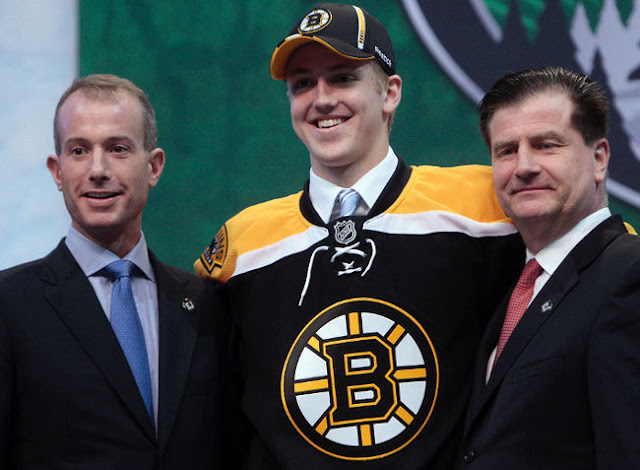 The 2011 NHL Entry Draft was a busy day for Boston Bruins General Manager Peter Chiarelli who had picks in each of the first six rounds. The day started on a high note as Chiarelli, still basking in the afterglow of Boston’s first Stanley Cup in thirty-nine years, took a defenseman, Dougie Hamilton, with the ninth overall pick. Moments later, as both Hamilton and Chiarelli gave their respective post-draft interviews, it was hard to tell who was more excited. Standing nearly 6’5” and pushing 200 pounds, Hamilton, a Toronto native, comes to Boston via the Niagara IceDogs of the OHL. Ranked fifth amongst all eligible skaters by NHL Central Scouting, Hamilton was projected by many to be long gone when it came time for the Bruins to pick. Hamilton also excels away from the rink, and was this year’s recipient of the Canadian Hockey League Scholastic Player of the Year Award, earning a ninety-four percent average in his grade twelve year at Crestwood Preparatory College.

Fortunately for Chiarelli (and unfortunate for the other seven teams that passed him up), Hamilton was still patiently sitting up in the stands of Minnesota’s Xcel Energy Center with his family and friends, waiting to hear his name called. I’m not quite sure what caused Hamilton to fall down in the draft; it could be a combination of the excessive attention focused on Adam Larsson as the only “blue-chip” defenseman in the first round, and the sheer incompetence of teams (namely Ottawa and the New York Islanders) that selected earlier in the draft. Whatever the cause, Chiarelli admitted that there was no way he thought Hamilton would be available at number nine, and I would be curious to know whether or not the Bruins made any attempts to trade up in the draft. Celebrating his eighteenth birthday just days prior, Hamilton is likely at least a year, maybe two, away from making his Garden debut. B’s fans will be able to get a sneak peak at him this summer during the Bruins Development Camp, before he returns to Canada to participate in Team Canada’s evaluation camp in preparation for the 2011-12 World Junior Championships. Hamilton will be joined here by his brother Freddie as the duo attempt to become the first brothers to play together for Canada at the WJC since the Mollers did it back in 1982.

When he does break into the pros, Hamilton will start with a distinct advantage; he will learn how to best utilize his size and reach from “Big Z” the tallest man with the longest reach to ever play the game. Like Chara, the one criticism levied at Hamilton, despite his size, is a lack of physicality in his game. However, there seems to be some disagreement on this issue. When Hamilton was drafted, analyst Pierre McGuire said that the Bruins had just got “a whole lot more nasty,” which is simply music to any Bruins fan’s ears. A fitness fanatic, Hamilton can easily log thirty-plus minutes a night with plenty left in the tank. And as solid as he is on the back end, he is an offensive-minded defenseman who not only makes a good first-pass, but also loves to rush the puck and drive the net in a style similar to the much maligned P.K. Subban in Montreal, but without all the theatrics. The Hamilton pick closes the book on the Phil Kessel deal with Toronto, and while it is much too early to say which team will come out ahead, the Bruins have already hung a championship banner in the rafters of the Garden and added two potential franchise players who can make Boston a perennial Stanley Cup threat for years to come.[endtext]