Bruins Have a Khokh and a Smile

With the majority of media attention focused on Boston’s first-round pick in this year’s
draft, the team’s second pick, Alexander Khokhlachev, has largely flown under the radar.
The Bruins took Khokhlachev with their second-round pick, acquired last season as part of
the deal that sent Chuck Kobasew to Minnesota. With this pick in his back pocket, GM Peter
Chiarelli had the manoeuvrability to trade the Bruins’ 2011 second-round pick (61st overall)
to Ottawa for Chris Kelley. Meanwhile, the Wilds’ poor season allowed the B’s to move up
in the draft, jumping eleven spots to fortieth overall. It’s these little deals, which receive little
acknowledgement in the press and amongst fans, that distinguish a great general manager, and
Chiarelli is quickly earning this status. 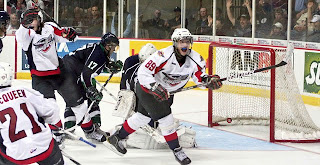 Khokhlachev, the second of only nine Russians to be taken at the draft, comes to the
Bruins via one of the OHL’s elite teams, the Windsor Spitfires. For a country that was at one
time the NHL’s premier supplier of foreign talent and that remains an international powerhouse
and producer of fine young talent (i.e. gold medal winners at the 2010 WJC) Russia was severely
underrepresented. In recent years it seems that NHL teams have become wary of drafting
Russian players for fear of running into another Alexander Radulov or Alexander Semin –
interestingly, two players that Khokhlachev has been compared to. In fact, many saw
Khokhlachev, or Koko as he’s known to his teammates, as a potential late first-rounder; and it
may have been this current stigma against Russian-born players that caused him to drop into the
second round.

Another cause was his size: 5’10” 170 lbs, despite some bios generously spotting him
another inch and a few extra pounds. Although other players of similar stature, such as Marty
St. Louis and Danny Brière, have flourished in the so-called ‘new NHL’, much of the old-school
prejudice against smaller players remains. That said, as one of the youngest players in the draft
(he turns 18 in September), Koko has plenty of time to add bulk to his small frame. And the
Bruins have no need to rush him along, as he likely won’t make his pro debut for a couple of
seasons.

In the meantime, I don’t think there is any serious concern of Koko returning to Russia to
play in the KHL. His decision to come to Canada to play junior was twofold: greater exposure
to NHL scouts and the opportunity to learn the North American brand of hockey. Players don’t
typically choose to play in a league as tough as the OHL if they’re not serious about an NHL
career. In his first season with the Spitfires, Koko finished third in the league in rookie scoring,
putting up 76 points and adding another 20 in the playoffs. The Moscow native also dominated
for Russia at the World Under-17s, leading the team with thirteen points and was named a
tournament All-Star team.

An offensively gifted forward, Koko can play either left wing or center. He excels both
as a play-maker and a finisher and displays soft hands in and around the net. Despite his lack
of size he is not afraid to get his nose dirty and is willing to take a hit to make a play. Koko
uses his strong skating to find the open ice where he’s the most dangerous. Still, he needs to
work on his defensive game, becoming more responsible on the other side of the puck and be as
aggressive on the backcheck as he is on the forecheck.

When he does get called to the show, it will be interesting to see how Koko adapts to
Claude Julien’s defense-first system, assuming that Claude is still at the helm. Regardless,
Koko’s ability to put points on the board combined with his physical play should endear him to
the fans, and he could very well be the next member of the little-big-men club in Boston, joining
other fan favourites like Danny Woodhead, and of course, the Muddy Chicken.[endtext]