The Bruins bowed out of the playoffs last night in one of the tightest series in NHL history.  This classic series could have went either way and the slightest bounce could have changed the fate of either team. Special teams usually play a huge factor in very tight series like this one was. Rather than place blame on individual players, one can look at the Bruins power play as the main culprit for the defeat. Last year’s run was epic despite a terrible power play. Each game I watched, I wonder when the power play would come back to haunt them and it never happened. Well it happened last night, with less than three minutes left the Bruins had the chance they were looking for and once again their man advantage let them down.  They were unable to generate any real scoring chances on Braden Holtby, who had a great series,  and the rest is history. 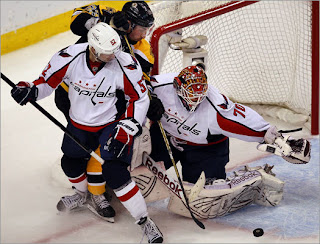 Caps coach, Dale Hunter was not afraid of the Bruins power play and as a result implemented a very tight defensive style which was reminiscent of the “clutch and grab” days of the NHL.  His team played on the edge all series holding up the Bruins from getting to rebounds and open scoring areas.  He did not have any fear that the Bruins would cash in if they took penalties, so he game planned accordingly. As a lifelong Bruins fan, it hurts me deep inside to say this, but it was a brilliant coaching job by Hunter.  He kept premier players like Semin and Ovechkin on the bench most of game 7 in favor of players like Hendricks, Chimera, Beagle and Laich.  Even Troy Brouwer saw more ice time than the Great 8. These lunch pail guys carried out his game plan to a tee.


The role players for the Caps out dueled the role players for the Bruins in the end and that is usually what wins series. The hot goaltender and role players supplying secondary scoring is vital in the playoffs and don’t forget special teams.  Honorable mentions was the absence of Adam McQuaid on the Bruins defense and the injury to Patrice Bergeron, who was in obvious discomfort for games 6 and 7.  In the end this series was a classic and it is too bad one of the teams had to lose.

What is next for the Bruins?  There is some speculation that last night was the final game for Tim Thomas, so are we moving into the Rask era?  The Bruins are still deep on the blue line so will the brass go out and get more scoring, which in turn should help the power play?  They have a long summer to think about it.