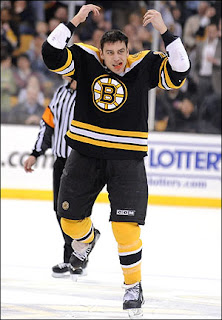 With the lockout looming the Boston Bruins locked up another one of their young star players Milan Lucic to a 3 year $18million contract extending him until the 2015-2016 season. Earlier this week the Bruins gave deals to Brad Marchand and Tyler Seguin.

With the lockout looming the Bruins assigned a number of their young players including Jordan Caron down to the AHL Providence Bruins. Also young prospects Dougie Hamilton and recently drafted Malcom Subban will be heading back to the OHL, however if the lockout does not happen both Hamilton and Subban can sign a deal with the Bruins.

Stay tuned for an update on the lockout news, as the league has until 11:59pm to come up with a deal.