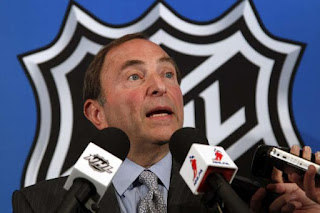 According to an article on ESPN, NHL commissioner, Gary Bettman, received an unanimous vote from the owners to lock out the players if no agreement is in place by the end of Saturday September 15th 2012. If the lock out is to happen it would be the third time in Bettman's reign of commissioner that the league has had a work stoppage.
To add to the sorrow, 283 players showed in New York including a majority of the Bruins roster. The league's most recent offer would reduce the players' share of hockey related revenue from 57 to 47 percent.
I do not understand why the owners and players can not just settle on 50-50. Seriously this is ridiculous when we the fans are the ones who are a main reason the owners are making their money. If the fans didn't attend the games that are overpriced compared to other sports, and didn't watch the games on TV then the NHL wouldn't make any money. I was for the players making more than 50% of the Hockey Related Revenue, as they work their asses off and risk their lives on the ice. The owners just sit their up in their tower raking in the dough that the players make them. At this point they should just settle on 50-50 and have a season. After all the NHL is doing very well and was only on the incline.
If there is a lockout it would be interesting to see how many fans loose interest in the NHL, or if they can settle on a CBA I wonder if fans may stick it to the NHL and stop going to the games.
Let's hope a CBA can be settled on. If not looks like we can watch our Celtics and Patriots.