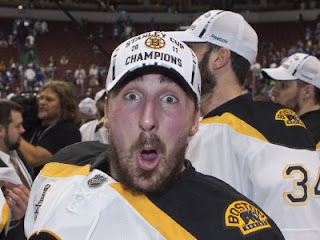 According to the  Boston Herald, The Bruins have extended 4 years onto Brad Marchand's contract, making him a Bruin until the 2016-17 season. Terms of the contract is roughly $4.5 million/year, which is a good price for a solid player entering his third NHL season. The only thing this means is Tyler Seguin is probably going to get extended as well, and his price tag will potentially be steeper, seeing how his predecessor in the draft, Taylor Hall, signed a 7 year extension with Edmonton earlier this off season with a price tag of $42 million or $6million /year.

Here is a video of Marchy doing his thing.