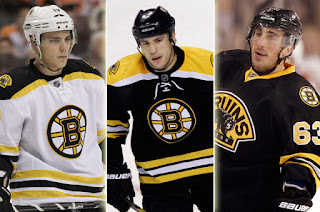 I came across an ESPN article the other day in which ESPN Insider Neil Greenberg ranked his top 25 NHL players under the age of 25. Among the list were three Bruins; Milan Lucic, Brad Marchand and Tyler Seguin. Jonathan Toews of the Chicago Blackhawks was ranked number one and Steven Stamkos of the Tampa Bay Lightning was ranked second.

Lucic was ranked 17th, Seguin 12th and Marchand 10th. These rankings are very interesting. In my opinion Lucic deserves his spot at 17th. Yes Lucic was once the blue collar rock-em sock-em player who's main purpose was to kick the opponents asses. However, in the past two years Lucic has stepped his game up immensely. During these years Lucic has surpassed 60 points, while also keeping to his bad-ass demeanor. The fact that he has developed stick skills makes him a very versatile player in this league, especially a player who fits the Bruins game style. This off season I felt the $6million per year contract extension was a bit much, but at the same time I'm glad he is still a Bruin.

Seguin ranked 12th may seem a bit too low to some, but during his first season as a Bruin, Seguin saw a limited role. Last season Seguin broke out with 67 points (29 goals, 38 assists), showing the NHL why he may be the next best thing in the league. Seguin has some great talent and I expect him to do great things in his coming years as he is only 20 years old.

Marchand ranked 10th is way too high. Sure he has put up great numbers the past two years and was an animal during the Cup run, but I'm not quite sold on him. He is known to irritate the opponents which can be comical, but at his size I feel he is biting more than he can chew and may get into some trouble and that could potentially lead to suspensions or injury. Marchand needs to cut out the diving and after play shenanigans and focus on playing hockey.

A few other young guys to look out for are Jared Knight and Dougie Hamilton. Knight (center)  is about the same size as Marchand and has put up tremendous numbers playing in the OHL. Hamilton (defense)  is a stud and should help out the blue line and power play.

Further down the line are two  defense men who played in the NCAA, Tommy Cross from Boston College and Torey Krug from Michigan State.  Cross is a decent sized defense men at 6'3" and 200 pounds. Krug is more of Marchand's size at 180 pounds and 5'9". Both of these guys have some great skills (I saw Cross play in the NCAA championship this past spring in Tampa and he is very solid). However, I don't expect these guys stepping up right away. Perhaps in a few years they can add some depth to an already solid defense.