At Least We Got the B's 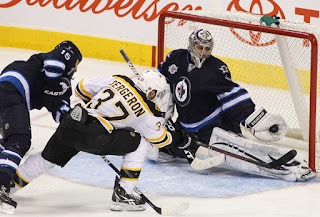 After a disappointing Pats game and the Celtics recent struggles many New England sports fans are in depression. The good news is that hockey is back and after watching yesterday's game the Bruins look like the team that won the cup 2 seasons ago. All of New England will now be switching their attention to the Bruins as they start their quest to bring Lord Stanley back to Boston.

They continue their quest tomorrow a 1pm Martin Luther King Jr. matinee at the Garden as the Winnipeg Jets "fly"  into town after a 4-1 loss to Ottawa on Saturday. The Jets aren't that great of a team and I expect the Bruins to put up a convincing victory.

Second, Tuukka. I want to see how Rask reacts after having a tremendous game against the Rangers where he let in one goal on 15 shots, a .952 save percentage.

Third, Defense. The defense once again was the back bone for last night's victory and the Bruins should be able to play shut down defense consistently this year.

Finally let's get the new guys confidence up. Horton looked pretty timid out there last night as he was pushed around a little. Chris Bourque had a chance to be his dad, but missed the empty netter. Hamilton looked pretty good defensively, but looked timid and didn't shoot as much as he should. I want to see all three of these guys break out this season. Horton is the goal scorer this club needs. Hamilton is the young stud, and I love the story of Bourque coming back to Boston playing behind the legacy of his father.