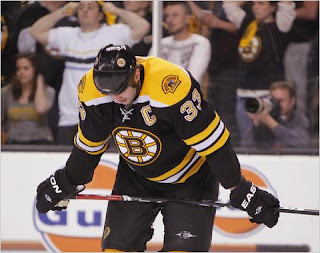 The power-play for the Bruins has struggled to become a consistent scoring threat in the NHL. Even though they managed to win the cup in 2011 we all remember the B’s terrible power play throughout the playoffs. Over the past three seasons the Bruins have ranked an average of 19th on the power play scoring on just 16.7% of their man-advantages.

They improved their numbers last year finishing 14th overall and finding the back of the net 17.2% of the time. The Bruins have plenty of guys that can put the puck in the net. They scored 260 goals last season which was tied for second best in the league with the Flyers (Penguins were first with 273).

I expect an improvement in the power play this year simply because the Bruins players have improved. By now they should be very comfortable playing together as a unit. Everyone’s a year older and a year more experienced. Seguin is on the threshold of becoming a top NHL goal scorer and once he does it will vastly improve the power play.

We’ve all read articles and seen brief practice highlights of what the PP might look like but realistically it’s probably going to change week by week once the season starts. The bottom line is the Bruins need to keep it simple. They need to set up guys like Seguin and Lucic in tight for scoring chances and work the puck back to the point to Chara for blasts. I would like to see Krejci back on the blue line with Z and Bergeron, Lucic, and Seguin up front. I think 46 and 37 can get the puck to Lucic and Seguin and set up Chara for one timers and back door looks.

In the NHL you must take advantage of power plays and convert as much as possible. This was ultimately the demise of the Bruins last year. Boston went 2 for 23 on the advantage against Washington last year in the first round. Considering they lost 4 games by 1 goal and lost the series in 7 games realistically one more power play goal probably would have got them to the next round.

I would also like to add that I thought the Chara in front of the net move was just plain awful. The guy has the hardest slap shot on the planet and Claude’s got him twisted up in front of the net trying to handle loose pucks with his 7 foot arms. Put him on the point and leave him there unless he breaks to the net for a little back-door action. His blistering slap shot is a necessity on the power play.