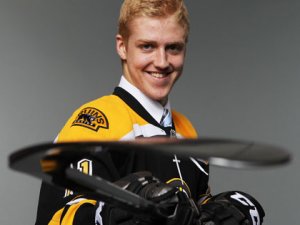 The Bruins 2011 first round draft pick (9th overall) Dougie Hamilton appears ready for the NHL and will be given the opportunity to play for the B’s this year. The 6’5 200 pound youngster is receiving high praise from the likes of GM Peter Chiarelli and Captain Zdeno Chara.
Chiarelli had mentioned before the lockout even began that he expected Hamilton to be in uniform for the Bruins this year. Hamilton has been a standout for his junior team the Niagara Ice dogs of the OHL for his prolific offensive ability as a defender as well as his tall frame and long reach. Dougie put up solid numbers for Niagara during the lock-out. He scored 8 goals and had 33 assists in 32 games.
Dougie is well aware of the transition to the bigger faster stronger NHL and knows he will have to hold back and play a more defensive game. He had this to say about it;
“In the NHL, there are not a lot of rushing defensemen and (the Bruins) kind of told me they like the ‘D’ to move the puck up and transition it quick, and that’s one of the things that I’ve been trying to do,” Hamilton said. “You can jump in the play and stuff like that, but I’m just trying not to lead the rush and just play smarter and good defensively.”
Big Z had nothing but good things to say about the Bruins new blue-liner;
“You don’t often see guys being so humble and almost like shy, coming around being so good,” Chara said. “We all can see he’s very talented and willing to learn. It’s exciting for all of us to have a guy like that around and try (to) help him out as much as we can and see him growing as a player and as a person.”
Claude Julien has been moving Dougie around at practice trying to find a good fit for him. He has been skating on the second defensive pairing with Seidenberg and is also taking shifts on the power-play with Chara. I wouldn't be surprised to see Hamilton paired up with Chara on a regular basis during the season. Good luck to anyone who tries to break in 2 on 2 against the reach and size of these two beastly defenders.
Cam Neely was on Felger and Mazz today talking Dougie and basically said he’s got the job right now and it’s his to lose. So Hamilton has the outright support of the GM, the president, the coach and the captain. With that being said I expect big things from Hamilton this year and I think everyone else in Bruins nation does as well.  And let’s not forget he’s only 19 years old. For all we know the kid is still growing… scary.
Follow me on twitter -@Rivetts5
GO BRUINS!