The Bruins are back and so are the fans 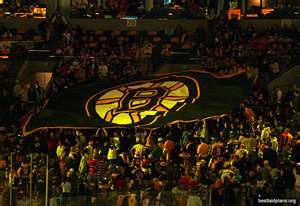 The Black and Gold kick things off tonight at the Garden with their annual inter-squad scrimmage. The Bruins printed 17,565 free tickets and all were claimed by 1:30 on Monday. The game will feature the entire Bruins roster as well as players from the Providence Bruins of the AHL.

With the season starting on Saturday teams will not have the opportunity to play any real pre-season games so the Bruins will try to make this scrimmage as game-like as possible with refs, two intermissions and three full periods.

If there was any doubt the fans would be reluctant to return to action it was squashed by the heavy interest in the scrimmage. True hockey fans don't care if it's an 82 or a 48 game season they just want to get back in the stands and watch their team.

The bruins basically have three types of fans:

1: True diehards and season ticket holders. We haven't gone anywhere. We're ready to go and are practically banging on the Garden doors to see some pro hockey. We have been filling voids with college hockey, juniors, AHL, and re-runs of the 2011 Cup finals (Game 3 never gets old). None of us have lost interest and we have high expectations for our young hockey team.

2: Bandwagons jumpers (I know, classic right?). These fans don't show up until April anyways so who's really missed them? Sure they score a set of tickets from Uncle Joe and hit up a couple regular season games but in reality they're just here to boost local bar sales and sell more merchandise during the playoffs. So of course they're coming back, but only if the Bruins make the playoffs. Same way it is every year.

3: Everybody else. Here lies the majority of the fan base. These fans like hockey in smaller doses. They attend games occasionally and will watch a game at bar if it's on and maybe flip back and forth between the Bruins and Celtics games if there's nothing better to do on a Wednesday night. These fans basically forgot hockey was locked out. A lot of them are probably fans of other sports with hockey being secondary. So with football still going on and basketball in full gear there is enough of a distraction to keep them occupied. Anyways once the hype of the mini season gets going and the B's are in first place all these fans will be back in no time. By February people are going to be so hot for hockey the ice is going to melt. This season will have the biggest following in a long time.

The bruins will stream the scrimmage live on BostonBruins.com at 7:00 P.M.