Keys to the Game Vs. Buffalo

The Bruins are facing Buffalo tonight in a division rivalry game. The Bruins are coming off of a shoot out win over the New Jersey Devils. Buffalo on the other hand has lost its last four games the last of which was in over time against the Toronto Maple Leafs. The Bruins have been dazzling and the Sabres have been awful.

The Sabres made a few off season moves to try and match the Bruins physical and defensive capabilities. The Sabres tried to do this by signing tough guys Steve Ott and John Scott. In the first two games of the season Buffalo was treated like one of the toughest teams in the NHL. NBC commentators said the Sabres are a new team and a team that will be feared. But after four games the Sabres have been put back into their place as one of the softest NHL teams and now it's up to the Bruins to destroy them. The Bruins have a chance to put the Sabres in check for the rest of the season. Like any NHL team the Sabres are still risky and need to be taken seriously.

1) Destroy. The Bruins have had to face teams where patience has always been a key. Teams with great defenses and even better goalies. But now the Bruins are going up against a mediocre defense. The Bruins can make a few mistakes if it means more offensive opportunities. Dougie Hamilton can be one of the players who can perform even higher tonight then in past games. I feel Dougie could get his first career NHL goal.

2) Fighting and Physical. The Sabres will want to come out and prove themselves and look tough. They will probably start a few scraps early and fight later on. The Bruins will have to crush the Sabres physically and emotionally when fighting. Any time a Sabre steps up then so should a Bruin. The Sabres can not start to feel confident about themselves or all the momentum will go to them. Forward Lane MacDermid was called up by the Bruins today and could take Bourque's slot this game. MacDermid gives the Bruins even more physical power and another fighter.

If the Bruins are big and bad they can continue to own the  Sabres in the division. 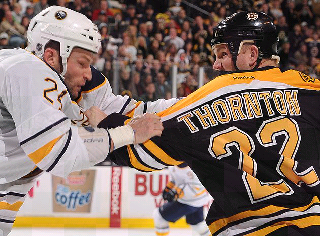