Mr. Seguin Is There, Don't Worry 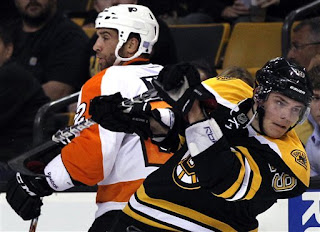 I wrote about this topic 2 weeks ago when Tyler Seguin had 6 points (4 assists 1 empty netter and 1 "real" goal). Since that day the Bruins have played 5 more games and Seguin's point total has raised a whopping 3 points! (3 Goals 6 assists) In no way am I bashing Seguin, because he is one of my favorite players, and I will explain later in the article how he is helping this team.

However, I wanted to compare Seguin's stats to the man he played with in Switzerland, Chicago Blackhawk's star, Patty Kane

Granted the Bruins have only played 14 games so far, which is the least throughout the whole NHL, so maybe just maybe Seguin will unleash in the next few weeks when the schedule condenses. Nevertheless, let's look at Kane's stats.

To Kane's advantage he has played an extra 3 years in the league, and played 3 more games on the season. Also, he is in no way the same player as Seguin,  I am clearly comparing the fact that they both played over seas, and Kane hasn't had trouble producing in the short season with 23 points (14 goals and 9 assists).

Now, I said this last time and I will say it all season. The Bruins are a balanced team. Each night it is a different player leading the way to victory. Compared to the Chicago Blackhawks, The Bruins are a different breed. The Blackhawks are playing outstanding hockey, mostly relying on their top 4 offensive players, Kane, Hossa, Toews and Sharp.

Now, if you have watched the last couple of Bruins games, you probably have seen how Seguin has contributed to the Bruins. Seguin is playing solid defense, becoming more physical, and making some crucial plays, i.e. in the late first period of the Winnipeg game, where he helped deflect a pass that would have set up a quality shot.

Another thing, if you watch Seguin play, he hustles his ass off. He goes balls to the walls on most plays and put his all on the ice. So, in conclusion, the fact that Seguin is showing his passion for the game, and giving his all shows that there is nothing to worry about. The Bruins are a defensive minded team, and need their players to be more defensively minded, compared to the hockey Seguin was used to in Switzerland. If Seguin was not hustling and playing defense, Claude would have sat him already, so folks, there is nothing to worry about, Seguin is all right and he will have his fair share of points.