Imagine if you will President Obama resigning from the Oval Office to the mountains of Colorado. Staying hunkered down in a bunker waiting for the "end of times". Tim Thomas just about gave up the same amount of respect and adoration when he announced he was not going to play at all in the 2012-2013 season. And yes I used a President Obama example to explain the Timmy Thomas situation. But as much as Thomas doesn't agree with the man he also had just about the same amount of prestige as him in Boston. Without Tim Thomas the Bruins would not have won a Stanley Cup. But today it was announced the crazy former Vezina goal tender, hiding in his bunker, eating Ramon Noodles and wearing his protective tin foil hat was traded to the New York Islanders. 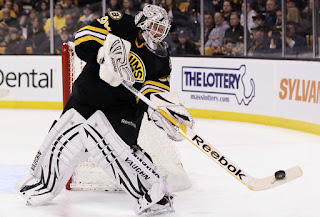 Timmy was traded for a second round conditional pick. Which means Tim Thomas has to play a game for the Bruins to get the pick. The deal was mainly made by the Bruins to clear up cap and by the Islanders to get more cap. Now it truly is Tuukka Time.