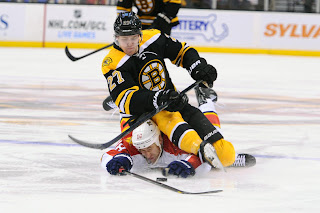 It wasn't the greatest win, but it was a win, and that is exactly what the Bruins needed after Tuesday's disaster. Behind the help of goals from Chara, Bergeron (2) and Thornton, and 29 saves on 30 shots for Tuukka Rask, the Bruins held off the Panthers 4-1.

The scoring started from captain Zdeno Chara on a slapper from the point. At the end of the first Bergeron found the back of the net on a nice back door set up from Marchand and Seguin.

In the second period, the Panthers quickly cut the lead in half after a pretty Shawn Matthias short handed goal. The Panthers continued to keep the puck in the Bruins zone for a majority of the period, but the Bruins escaped with the 2-1 lead.

The third period saw more of the Bruins sloppy own zone play, but were lucky to eventually get the puck in Florida's zone and convert on a Shawn Thornton follow up on his orignal shot.

A few moments later Horton would score a goal that would be called back due to Milan Lucic goal tender interference.

Bergeron added an empty netter with less than a minute to go to seal the deal.

The Bruins finally got a regulation win. However, the suspect play after maintaing a early lead resurfaced. They get tomorrow off before playing at the back to back against Washington at Boston and back in Pittsburgh on Sunday.

Maybe having a day off without traveling will help the Bruins, and let them come in Saturday afternoon strong.