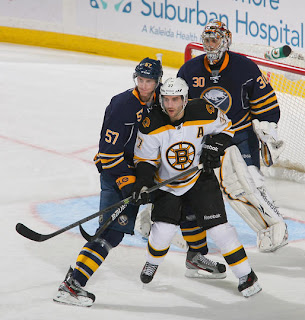 It looked like it was going to be the same story, Bruins come out sluggish and lose a game that they should have won, but the Bruins silenced the haters as they erupted for 2 goals late in the third period to shut the door on Buffalo, and put a positive note to a rather bleak March.

It looked like it was going to be a tough night. Backup Anton Khudobin helped the Bruins stay in the game despite sloppy plays by the defense. The Bruins and Sabres went scoreless into the third, before David Krejci worked in front of the net to finish the scrappy play and the decisive game winner. A few minutes later the Krejci line lit the lamp again as Nathan Horton scored another gritty goal.

Backup Anton Khudobin played excellent as he kept the Bruins in the game from start to finish.

The Bruins finally got a much needed win after playing rather sluggishly these past couple of weeks.

It wasn't the prettiest win, but a win is a win and hopefully the Bruins gained some confidence. I still expect the Bruins to make a move at Wednesday's deadline, whether it be a puck moving defensemen or a much needed veteran winger.

In other news Sidney Crosby broke his jaw and will be indefinitely out. Guess you could say karmas a bitch for persuading Jarome Iginila to come to Pittsburgh instead of Boston. Wonder what Iginila thinks about that decision now...

Bruins head back home to face Ottawa on Tuesday, before the deadline comes on Wednesday. Will be an interesting couple of days for the Bruins, but a win is in the right direction.