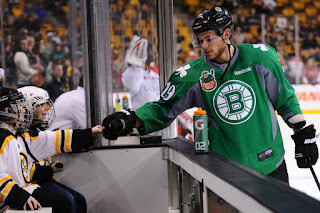 Behind goals from Nathan Horton, David Krejci, Andrew Ference and Rich Peverley the Bruins man handled the Washington Capitals. Backup Anton Khudobin recorded 32 saves on 33 shots, with the only goal coming on a David Krejci own goal off the skates of a Bruins defensemen.

The Bruins came out to a 2-0 lead off a Nathan Horton slapper, and a David Krejci wrister.

The Bruins started the second period in their own zone, before David Krejci tried clearing a puck out of the zone resulting in an own goal.

The Bruins finally didn't cave in after establishing an early lead, something that will hopefully continue to carry over to tomorrow's game in Pittsburgh.