In Game Keys (Keys To The Game VS Caps)

Its the eve of St. Patricks day and the Bruins are about to play the Washington Capitals. The Caps beat the Bruins the last time the teams faced off. They also beat the Bruins in game 7 of last years playoffs.

Bad blood has began to boil, at least on the Bruins. The Bruins had a 3-0 lead agianst the Capitals the last time they played and then the Bruins blew the lead. The Capitals won the game that the Bruins wanted to win. Some revenge. But now revenge isn't really an option anymore. Sure it'll feel great to beat the Caps. But the Bruins lost that chance and just need to skate their game.


1) Play Full 60. The last time the two teams squared off the Bruins blew a 3-0 lead. Recently the Bruins havn't been themselves in the third period. The Bruins just need to play a full 60 and continue to play hard.

2) Krejci Line. Lucic and Horton havn't been scoring a lot recently. With the Bergeron line doing so well and the fourth line doing great as usuall the Krejci line needs to step up. Especially now that Kelly went down and the third line has been weakened.

3) Pittsburgh. Yes, Pittsburgh again, tomorrow afternoon. The Bruins blew a 2-0 lead against the Penguins the last time they faced eachother. The reason for this could be that the Bruins had to face Ottawa the night before and come back from a 2-0 defecit. The Bruins can't use up all their energy on the Caps because they face even tougher Pitt tomorrow. 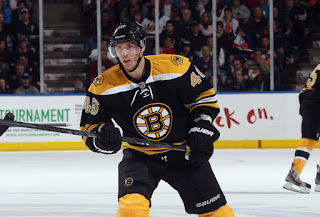