Bruins With Ugly Loss in Washington 4-3 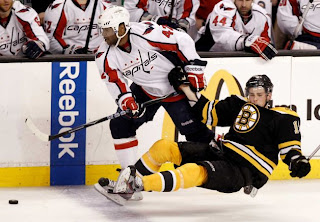 It's never easy with the Bruins.

It looked like the Bruins were going to breeze right through this one as they came out of the gates to the tune of a 3-0 lead after one, thanks to a Brad Marchand short handed penalty shot, a Zdeno Chara cleanup, and a Dougie Hamilton power play rip.

It looked like the Caps were out of the Bruins league, however they proved everyone wrong. 2 periods later and the game was to be decided in OT, where just 37 seconds in Eric Fehr scored a highlight real goal.

There isn't much to talk about here except the lack of urgency and care on the Bruins part. They coasted through the last 2 periods and looked like they could really care less. They were granted a powerplay with 3 minutes left in regulation, yet showed no urgency to pepper Washington Capital's goal tender Brandon Holtby.

The third line played god awful. Bourque finished -2, Peverley -2 and Chris Kelly -3. Maybe Claude sees this as an idea that they need someone different if they want to win the cup, because if the Bruins keep playing this way they won't even make it past the first round.

They left Alex Ovechkin open a number of times, particularly at the end of the game where he was cherry-picking behind the Bruins defense and almost converted.

In overtime, the defense let Eric Fehr skate right through the defense and somehow score an unbalanced goal that will most likely be on sports center later tonight.

The Bruins need to start showing the heart they had on Saturday. Two ugly losses in a row. No one can  be blamed for this loss except the Bruins as a team.

Shit happens and every once in a while a team plays bad, but tonight there was no heart, no determination and it looked like the Bruins could care less.

The only positive you can take out of this game is the fact that we came out with a point that we didn't deserve, hopefully Claude gives them a tongue lashing.

Let's hope the Bruins turn it around on Thursday when they come back home to face the Maple Leafs.

On the plus side the Celtics won.